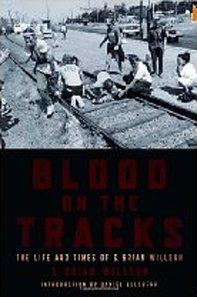 Like Bob Dylan, the source of this bookís title, Brian Willson celebrated his 70th birthday this year. I first heard about Willson while living in the US at the Los Angeles Catholic Worker in 2001. There I heard the story of how he lost his legs while trying to stop a train exporting arms to Nicaragua in 1987. I knew little more, but Willson soon joined the growing number of inspirational resisters I learned about and met during the two years I spent there. Some of these are named in this book and reading it was a great joy for me as those two years were the most formative in my life, and I am now 65!

The style and tone of this book remind me of Phil Berriganís autobiography, Fighting the Lambís War. Like Berrigan, Willson had been a soldier before embracing nonviolence as a way of resisting the American Empire. The easy movement between storytelling and reflection keeps the interest of the reader and gives much to think about.

Willson's narrative takes us from his ìall Americanî boyhood  to his present simple and sustainable life, by way of military service in Vietnam, Veterans Against the War, work for prison reform, anti-racist campaigns, law school and, crucially, resistance to US policy and practice in Latin America.

In 1986 Willson and other veterans began the Veteransí Fast for Life for Peace in Central America.  Before this and after, Willson travelled extensively in Central America to show solidarity, promote peace and engage in nonviolent resistance to his own government's policies in the region. One year after a fast he joined with others to block the transportation of arms to the Contras in Nicaragua. The weapons were taken from Concord Naval Weapons Station in California by train. On 1 September 1987 Willson and three others sat on the track to stop the train. The train did not stop, his companions jumped clear but Willson was seriously injured and lost his legs. The incident is described movingly in the book and is illustrated by many photos of the tragic day.

The book continues by charting Willson's recovery and his continuing resistance . On his "Third world legs" he has continued to travel to troubled areas of the world where US military involvement has destroyed life and land.

The extensive collection of photographs illustrates all the stages of Willson's life and work and helps, with the clear and truthful writing, to build up a picture of the man.  However, it is the powerful Conclusion which puts all his resistance into context and reveals a thoughtful, reflective man who does not shy away from facing difficult truths about what we have made of our world. This said, he does have a message of hope as he points out that "the more we obstruct continuation of industrialized civilization, and withdraw our cooperation and support, and the more we reconstruct locally sufficient economics, the better chance our species and millions of other life forms have for a dignified survival."

Susan Carkson was a member of the Riverside Plowshares action, New York City, 25 May, 2003, and is now a core member of the Oxford Catholic Worker.