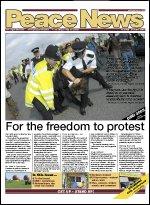 Storm of criticism for armed drones

In June, the use of armed (pilotless) drone aircraft came in for criticism from a senior UN official, Amnesty International, and, reportedly, CIA officials. Meanwhile, the Ministry of Defence confirmed that Britain and France were conducting a feasibility study into the possibility of jointly producing or purchasing a new drone aircraft.

On 8 Nov 2004, after more than two months of aerial attacks, the US began its second major assault on Fallujah, devastating the city and killing hundreds of civilians.

How many lives to the litre?

At midnight on Friday 16 September, we were dropped off at the edge of the forest at Padworth, between the UK's nuclear weapons factories at Aldermaston and Burghfield, for a hike to the fence of Defence Fuel Support Point (DFSP) Aldermaston, we h

Political folk band Seize the Day, comedian Mark Thomas, and human rights lawyer Clive Stafford Smith descend on Hiatt's in early September to perform the Shackle Shuffle and to give the shackle-making company the message that their continued invo

On 24 September tens of thousands took to the streets in London and Washington DC to protest at the ongoing occupation of Iraq.

Over the weekend of 24-25 September, peace activists visited two US military bases - Croughton in Oxfordshire and Lakenheath in Suffolk.

For the freedom to protest

PN talks with Dave Morris and Helen Steel about sustaining long-term campaigns, making visible the links between different issues - and about the current struggle against corporate and state power, and for the freedom to protest.

The politics of food

"I'm a journalist, I'm allowed to be here"

Being an Indymedia cameraman is becoming a hectic pastime in these, the last days of freedom in the UK. The DSEi weapons convention was a damn fine example of the increasing crackdown on free speech.

Looking for nonviolent ways to confront, resist, challenge and respond to violence

Since the end of July, Northern Irish politics and communities have experienced change,upheavals and violence: from the IRA's declaration of an end to armed struggle, to September's extended rioting across Loyalist communities, and the use by the police of water cannon and live rounds against citizens. Peace News invited members of the Northern Irish peace movement to tell us what they are thinking.

The laser has landed...

Well maybe not. Plans to build a £20 million state-of-the-art laser facility at Aldermaston are beginning to unravel.

Love your enemy... everyone can change: Bob Geldof

Working on the solid nonviolent principle that we should transform our enemies, PN brings you a slightly tongue-in-cheek column dedicated to getting to know our"enemies" better.