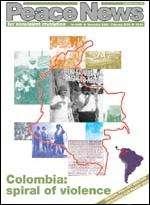 “In prison, when I am forced to salute state and army, I shall, in my mind and heart, be saluting all my brave friends ... all those who sacrifice so much more then I for peace, against the occupation.”

As we went to press the European Social Forum (ESF), held in Florence, had just got under-way, with more than 30,000 people signing up to attend.

Anti-war feeling mounts around the world

Hundreds of thousands of people have marched in peaceful demonstrations around the globe in the past few weeks, joining the growing protest against the US's impending war on Iraq.

Japanese activists take to the streets

In October, the Kansai Antiwar Joint Action Group, a Japanese peace movement network, passed a “Resolution Against Aggressive War on Iraq by the Bush Government of US and Against Participation in the War by the Koizumi Government of Japan”

As we went to press another Castor shipment of nuclear waste began its journey from the Cap La Hague reprocessing plant to Wenland. And this time there are 12 containers rather than the usual six.

While urging our steadfast commitment to actively opposing and resisting the proposed new war on Iraq, Milan Rai also offers some hope for anti-war activists around the world.

Dreaming of a different tomorrow

What do you associate with Colombia? Biodiversity? The writer Gabriel García Márquez? The painter Fernando Botero?

Two statements from March 2002 on the breakdown of peace negotiations

Who said all is lost in Colombia? Women propose stopping the war now

An obstacle to "progress"

"The spiritual leaders of the Curripacos and Puinaves in the Colombian Amazon, or of the Sions and Kofanes of the Orinoco, carry out rituals of protection when their people are about to quietly leave their riverside or jungle homes. They invoke magic to render bullets harmless against their people and have paths close behind them, keeping them out of reach of their enemies. With sacred plants, they induce visions or dreams that reveal new threats to them. These protections and spells have worked for centuries. They formed part of the culture of resistance to colonisation, plunder, submission to conquistadors, missionaries, plantation-owners, loggers, emerald-collectors, the hunters for hides, miners, oil companies, multinationals and diverse looters. But the magnitude and intensity of the violence in Colombia in the last two decades seems to have demolished thesevenerable methods of defence." - Blanche Petrich (Ojarasaca 45, January 2001)

In the city of Medellín youth activists are taking a stand for peace within their highly militarised communities. Adriana Castaño from the Red Juvenil - Youth Network - reports.

Earlier this year Howard Clark interviewed former ELN guerrilla Pastor Jaramillo for Peace News. He talks about the challenges and frequently dire consequences of "reinsertion" into civilian life and suggest a prognosis for the future of peace talks.

US military involvement in Colombia's internal affairs - as epitomised by Plan Colombia - has been a constant feature since the 1960s, while support for "ordinary" Colombians caught up in the brutal civil war has come from specialist solidarity groups from around the world. Sean Donohue takes a look at how activist groups in the US are now building new and diverse solidarity networks that are calling for an unequivocal end to US military involvement in Colombia.

Is a group whose objective is to raise awareness in British Columbia, Canada, about the Colombian humanitarian crisis and the nonviolent social movements that mobilise for the construction of peace and the defence of human rights.

The deaths of seven trade union activists from companies associated with Coca-Cola in Colombia have prompted US workers to organise in solidarity with their Colombian compadres.