The Judge Lord Justice Laws looked over his glasses, he was a no messing kind of guy with a habit of cutting to the chase immediately. “So this £50- £100 k figure, where did it come from? Is it the governments?”

The defence Lawyer for the Secretary of State Mr Grodzinski flicked through his papers to find the source. Indeed it was the government’s calculated annual expense for judicial reviews- cost was the main justification which the Ministry of Justice had used to cut legal aid for judicial review cases.

Justice Laws looked truly astounded, he had obviously followed the…

Filed with the take-away leaflets

Maya Evans has a case against her heard in her absence ...

It was back in November sometime when I discovered a phone message from someone at Charing Cross police events department asking me to return their call. Reluctant to spend money on a phone call which I didn’t really want to have, I called the number.

I found myself talking to a rather confused police officer who said they wanted to complete information for their files regarding an unauthorised demonstration I had co-organized back in October, and also the use of a megaphone in the area of Westminster. The latter charge seemed like a hilarious joke – ‘bring it on’ I thought to…

Nonviolent Resistance in An Nabi Saleh

During my time working with the International Women’s Peace Service I have witnessed many human rights abuses in the West Bank Palestine – house demolitions, settler violence, army and settler destruction of olive trees and fields, army intimidation of workers – the list goes on.

But none has been more heart rending than the Israeli attempt to crush the nonviolent Popular Resistance to the Occupation in the small village of Nabi Saleh. The objectives of the resistance is to end the occupation of… 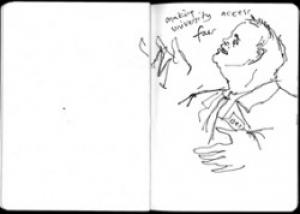 The Lib Dem Spring conference was the focus of anti-cuts protests in Sheffield this weekend. Hidden behind two million pounds of security fencing and applauded by the party faithful, Nick Clegg seemed oblivious. He was just elated to ‘have the reins of power’.

I’m currently in training for the London Marathon (more details here), a slightly mad endeavour which means putting myself through increasing long runs in and around Oxford. I tend to find I do a lot of musing as I run, and it crossed my mind the other week that my experience actually might be be of use in the event of getting caught in a kettle. Since there’s a rather big protest coming up this weekend with kettling chances high, I thought it might help to share.

1. Toilet facilities. One of…

An anonymous article sent to PN explains how you can fill in your Census form without benefiting arms company Lockheed Martin or creating funding problems for local authorities.

US Arms Manufacturer Lockheed Martin has the contract for the 2011 UK Census in March this year.

The arms manufacturer Lockheed Martin US makes Trident nuclear missiles, cluster bombs and fighter jets and is involved in data processing for the CIA and FBI. It has provided private contract interrogators for the Abu Ghraib prison in Iraq and Guantanamo Bay. Lockheed Martin has the UK Government contract to collect the process the data for the 2011 census in March. (Observer, 20 February 2011)

If you do not complete the census form and…

An anonymous article sent to PN explains how you can fill in your Census form without benefiting arms company Lockheed Martin or creating funding problems for local authorities.

US Arms Manufacturer Lockheed Martin has the contracy for the 2011 UK Census in March this year.

The US arms manufacturer Lockheed Martin makes Trident nuclear missiles, cluster bombs and fighter jets and is involved in data processing for the CIA and FBI. It has provided private contract interrogators for the Abu Ghraib prison in Iraq and Guantanamo Bay. Lockheed Martin has the UK Government contract to process the data for the 2011 census in March. (Observer, 20 February 2011)

WHAT YOU CAN DO

Lockheed Martin is in it for the money. A principled… 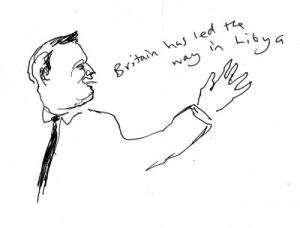 Drawing (along with shouting, swearing, throwing things and throwing up) is not allowed in the houses of parliament. All the more reason to do it. Here is David Cameron defending the SAS mission to Libya in PMQs last week.

Nabi Saleh is still on my mind and so is the new word I have learnt – “sumoud”. Picture this, during the afternoon of the demo, when things were quiet a group of us gathered under the water tower in the main square and sat on some pipes in a u-shape to chew the fat. Ben, an Israeli activist, appeared with a coffee pot and glass cups from a nearby house and we had a welcome coffee break.

Just as we finished and the cups collected, three soldiers appeared at the edge of the square and threw tear gas canisters directly at us. We ran, the coffee pot discarded on the ground.

The ‘Teutates’ agreement was signed by David Cameron and President Sarkozy in November and presented as an exercise in military economy. We were told that we and the French have similar needs in the ‘stewardship’ of our nuclear arsenals, and that sharing research facilities will save expensive duplication. What was not stressed was that this treaty commits both nations to undertake a 50-year programme of cooperation on nuclear weapons technology at a new hydrodynamics research facility known as EPURE at Valduc in France, where conditions for underground nuclear testing can be simulated and…

<p>Should ex-soldiers be enlisted as teachers?</p>

I have just read that Lordswood School in Birmingham employs ex-soldiers as teachers and runs a cadet-force to which a fifth of the pupils belong. They wear uniforms and they are taught to shoot.

Michael Gove believes this is the right way to tackle disorder in the classroom. He says, ‘The presence of role models who have the sort of experience in taking young people and forging them into a cohesive team and instilling discipline; I think that will be immensely valuable.’ (Quoted in the …

Why I am a pacifist

Chris’ recent  stay in Wandsworth Prison has led to some interesting conversations lately. And that’s got me thinking about when I became a pacifist and why I still am one.

I’m not sure I can pinpoint an exact moment in my life when pacifism made sense to me. But I know the milestones. The first was reading the World War 1 poets – particularly Wilfred Owen - whose  lines in Dulce et Decorum Est still resonate  with me today: “My friend, you would not tell with… 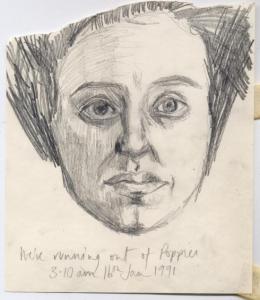 We are running out of poppies.

This is a set of pictures that I drew in 1991 in the nights leading up to the first Gulf War. They are not very hopeful, but maybe in themselves they were an attempt to avert the very apparent horrors that war would bring. Partly they were an attempt at magic and partly they were like willing the aeroplane’s wings not to fall off when you are 50,000 feet up in the air. It would take an awful lot of poppies now to mark the dead of the last twenty years.

PFC Bradley Manning has been in a maximum-security prison in Virginia, USA for the past eight months after being accused of leaking classified information to WikiLeaks. This information includes the “Collateral Murder” video, which depicts a 2007 US helicopter attack in Iraq that killed 12 people. Manning has been in solitary confinement and under constant surveillance although he has not yet been tried or convicted of his crimes.

Manning is being held in the Quantico Confinement Facility under inhumane conditions. He spends every day in a 12’ x 6’ cell and he is only allowed out… 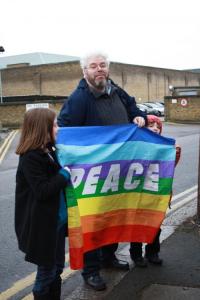 Chris Cole out of jail

Christian peace activist Chris Cole was released from HMP Wandsworth this morning after serving 15 days for an act of civil disobedience. Cole was arrested in 2009 for criminal damage in response to a nonviolent direct action at the Defense and Security Equipment International 2009 Arms Fair. He spray painted the entrance to the conference center with ‘Make Peace, not war machines’ and the ground outside with ‘Stop this bloody business’ and ‘Arms trade = death.’ After his arrest, Cole was fined just under £2,000. He refused to pay the fine, and he was sentenced to 30 days in prison, which…