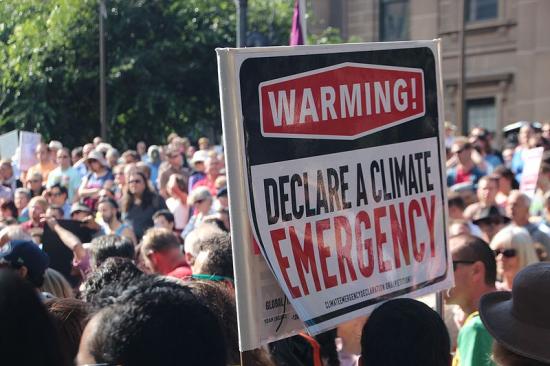 Melburnians at the March for Science on April 22, #Earthday2017. Image: Takver via Wikimedia Commons.

If Extinction Rebellion plans to gradually build capacity for its big demands by winning smaller-scale victories then why has it launched itself with (apparently) no indication as to what these smaller-scale wins are going to be?

Lots of people seem to be very excited about Extinction Rebellion (XR)’s ‘declaration of rebellion’ and its plans to ‘bring large parts of London to a standstill [later this] month’ to push its three big demands on climate change.

The issue could hardly be more important, a lot of effort appears to be going into XR, and hundreds of people are apparently fired-up and committed to engaging in civil disobedience over climate change. This is both impressive and commendable.

And yet, I have to say – as someone who has been involved in organising and taking part in acts of nonviolent direct action and civil disobedience for over 20 years – that I’m highly sceptical about this initiative.

In his latest book, How We Win, veteran activist George Lakey (who's been involved in quite a few winning campaigns over the last five decades) writes that:

‘Some people seek to mobilize people around a general concern, like climate or war or poverty, but such mobilizations are like one-off protests—they don’t win anything. Martin Luther King, Jr., discovered this in Albany, Georgia, where the campaign goal was to “end segregation.”

'In 1961 the Student Nonviolent Coordinating Committee (SNCC) and other groups started the direct action campaign. It was joined by Dr. King late in the year and continued well into 1962 before giving up.

'King’s reflection on the loss reinforces the importance of choosing goals carefully: “The mistake I made there was to protest against segregation generally rather than against a single and distinct facet of it. Our protest was so vague that we got nothing, and the people were left very depressed and in despair.”'

Lakey continues: '[W]e make progress on our concerns when we campaign with a clear demand. Multiple campaigns on that concern build a movement. Multiple movements can then join and become a movement of movements, opening the door to a whole new level of justice impossible
previously.’ [1]

While Extinction Rebellion does have three demands, these strike me as either pretty vague (‘That the Government must tell the truth about how deadly our situation is’) or almost impossibly [2] utopian (the Government enacting ‘legally-binding policies to reduce carbon emissions in the UK to net zero by 2025’ and the creation of ‘a Citizens’ Assembly to oversee [these and other] changes’).

"Some people seek to mobilize people around a general concern, like climate or war or poverty, but such mobilizations are like one-off protests—they don’t win anything

Even more importantly, there don’t yet appear to be any intermediate stepping-stone-goals on the way to winning any of these demands [3]. One could easily get the impression from the press reports that the plan is simply to block traffic and bridges in London until XR’s three big demands are met.

Note that the problem isn’t that they want to win big. Campaigns and campaigners have won big in the past: for example, Scandinavia's epic 20th century campaigns to wrest significant power from the 1%, creating the ‘Nordic model’. We need to learn the lessons from these and other campaigns – both successful and unsuccessful – if we want to maximise our chances of achieving similar successes in the future.

I hope I’m wrong, and that XR turns out to be more strategically-savvy than it appears to be, as we desperately need effective campaigns that can win the big changes that need to be won on climate change.

However, if the above impressions are correct then the XR campaign is more like a campaign to “end segregation” than one to end a “single and distinct facet of it”. The latter could lead to a winnable campaign (or campaigns) upon which futher victories could be built.

The former is a recipe for failure and burnout.

[1] George Lakey, How we win, Melville, 2019, p. 61. For a brief account of a strategically-savvy climate change campaign that won a significant victory by choosing its goals and its targets carefully see http://peacenews.info/node/7982/stopping-funding-mountaintop-removal

[2] XR-cofounder Roger Hallam has himself stated that: ‘We want to break new ground within campaigning and show to radical people internationally that it is possible to have an ‘impossible’ plan and carry out a rebellion, however small or large.’

[3] As of 1 November 2018, the section of XR’s ‘Whole campaign action/policy document’ on the ‘Provisional action plan of the rebellion’ reads, in its entirety:

A fair amount must be kept relatively secret for hopefully obvious reasons.
Key dates and public actions are in our events page of the facebook for XR:
https://www.facebook.com/pg/ExtinctionRebellion/events/?ref=page_internal

By comparison the same document goes into the following level of detail about the ‘Standard Structure of [XR] meetings’:

Meeting should always start within 10 minutes of the official start time so the groups does not waste time subconsciously thinking “I can be late because it always starts late”. Late people are reminded this is the convention.

Go round check in – names and how people are doing, with a view to helping them be present for the meeting

Report back on the action points from the previous meeting – note THIS IS NOT A TIME FOR DISCUSSION.

If further discussion is needed, add these to the agenda and DO NOT START DISCUSSING THEM.

If people aren’t present who said they’d do action points, and the status of those tasks is unknown, then someone is to be assigned to follow-up with them and check on the status, to ensure critical tasks are not dropped.

Confirmation of the agenda, asking for addition items them need adding, outlining a broad plan for time allocation for each point, and the finishing time of the meeting. For example: “okay so we have 6 points I suggest we have 10 minutes approximately on each on and we will finish the meeting in 1 hours time at 2 pm”. Items added at this time are generally to be added at the end of the agenda.

Regular business meeting should be no longer than 1.5 hours, as concentration dramatically decreases after that – have break for 5 minutes if needs be – and if there’s lots of the agenda still to do then it's probably a sign the sub groups need to form to deal with specialist areas.

At the end of the meeting people quick tell the group their action points (no discussion) so they are accountable to the group for the jobs they have taken on.

Always agree on the time and date of the next meeting, and who will ensure the meeting will happen (e.g. creating the GoToMeeting link and sending it out)

Melburnians at the March for Science on April 22, #Earthday2017. Image: Takver via Wikimedia Commons.

Gabriel Carlyle is the co-founder of Fossil Free Hastings and the reviews editor of Peace News. In 2009 he was one of 114 activists arrested for allegedly planning to shut down a coal-fired power station at Ratcliffe-upon-Soar.

Together with Emily Johns and Milan Rai he will be helping to run a workshop on effective campaigning (‘How we win: exploring nonviolent resistance’) at Hastings Arts Forum on Saturday 10 November: https://tinyurl.com/howwewinhastings