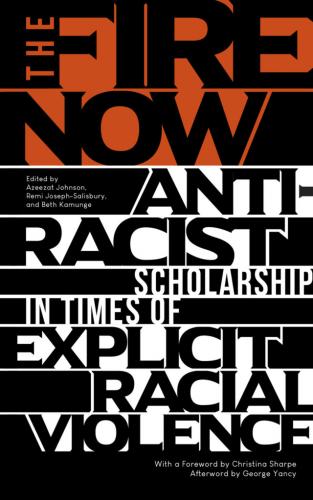 Over 50 people gathered in London on Saturday 10 November to celebrate the launch of a new book, The Fire Now: Anti-Racist Scholarship in Times of Explicit Racial Violence.  The event was a welcome mix of hearing from different authors (people of colour and also white) about the work they had contributed, followed by a thoughtful Q and A and discussion, refreshments and more incisive observations by the rapper Lowkey and professor Akwugo Emejulu

One of the book’s editors, Azeezat Johnson, who is a researcher at Queen Mary’s University (where the event was held) welcomed everyone and explained that the impetus for the book, which contains 23 essays by a wide variety of researchers on topics from climate change to 'Laughter and the Politics of Place-Making', was the aftermath of Brexit and the upsurge in racial vilification and violence.

Then it was over to some of the authors to explain what their chapters involved.

Remi Joseph-Salisbury, one of the book’s other editors, explained that his journey into academia had stripped him of some illusions about the connection between academic work and activism.  He pointed out that talking the talk must be matched by walking the walk.

China Mills spoke with precision and insight on 'Teaching White Innocence in An Anti-Black Social Order: British Values and the Psychic Life of Coloniality'.

Amal Ali matched that with an overview of her research on 'Intersectionality before the Courts: The Face Veil Cases' and its motivations. She argued that some, in this case Muslim women, face discrimination and disadvantage regardless of the Brexit result.

Adrienne Milner, who with Adekonyinsola Aromolaran had co-authored 'Colour-Blind Racism and the 2017 Women’s March: White Feminism, Activism, and Lessons for the Left', emphasised the work that white allies have to do if they want to contribute to a fairer world. One quote, of another writer on the Women’s March, was particularly apposite:

'A lot of marginalized people are now at risk because of white women voters … I’m sorry white women, but some of you helped get us into this mess. Perhaps it isn’t your voices that need to be amplified in the aftermath.'

Viji Kuppan, author the chapter 'Crippin’ Blackness: Narratives of Disabled People of Colour from Slavery to Trump', drew cogent parallels between enslaved bodies and athletes in modern America, and the protests over the anthem. He argued for the need to pay closer attention to the intersections between race and disability, and spoke critically of the way that disability studies are always white disability studies.

Leon Sealey-Huggins outlined his work on how 'The Climate Crisis is a Racist Crisis', talking about the structural racism and inequality within the status quo on our deteriorating planet.

Energy levels were already high, but Kaidan Pow, in explaining her chapter '"Be Exactly Who You Are": Black Feminism in Volatile Political Realities' gave proceedings a welcome injection of optimism.

The Q and A was, for once, not dominated by a few loud voices who thought they knew everything. We were encouraged to read, think, learn from each other, with the book Walter Rodney Speaks: The Making of an African Intellectual given as one useful source. On the question of what the best things that would-be white allies can do (beyond the usual being aware of space taken up, centreing and so forth), Azeezat Johnson was emphatic that allies should be talking with other white people about racism, its workings and implications.

Younger academics and students in the audience shared issues they were facing when trying to engage in anti-racist practice in their institutions. Responses, from presenters and academics in the audience emphasised the importance of finding or creating and maintaining supportive networks, and of self-preservation... that is, choosing battles that could be won.

After a break for refreshments and making new connections with other attendees, the event reconvened. Lowkey spent his time unpicking the implications of the government's 'anti-radicalisation' PREVENT programme and its implications for individuals and civil liberties, engaging the audience and providing a variety of alarming statistics and examples of the programme's consequences (which are, perhaps, not a bug but a feature). Professor Emejulu urged us to view the current upsurge of racism not as emerging de novo from the last few years, but as part of a much longer process, dating back to the 1990s.

Regardless of the outcomes of Brexit and the lifespan of the current Republican administration in the United States, the increased racial violence and vilification is unlikely to abate on its own.

Marc Hudson is a climate activist and a researcher, based in Manchester. He interviewed one of the editors of The Fire Now: Anti-Racist Scholarship in Times of Explicit Racial Violence for Peace News here.