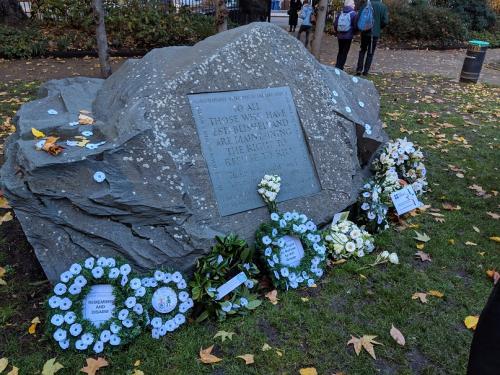 I observed the two minute silence at 11am in front of my television at home, unable to face the militarism (not to mention the crowds) taking place down the river at the Whitehall Cenotaph. The service in Tavistock Square, politely timed at 1pm for those who wished to attend both services in person, is far more my speed. Here there is no marching, no saluting, no talk of the glorious dead. Instead there is quiet reflection, poetry, and a deep sadness that far from ending all wars, 'The Great War' sowed the seeds for the next major conflict, and the Cold and proxy wars that followed. There was a theme this year at Tavistock Square, and a pledge – 'No More War – Let's Make Peace Happen'.

After a welcome from Pax Christi's Pat Gaffney, Marigold Bentley from Quakers in Britain spoke with great passion, asking - 'Have we ended war? Have we honoured those who died?' If the soldiers of the First World War gave their lives so that we might know peace, the only possible answer is no, our society has not honoured them. We have not known peace, not globally. It may have been decades since the United Kingdom has faced an existenstial threat, but around the world we have participated in conflict after conflict; Suez, the Balkans, Iraq and Afghanistan, the list is long and scary. These places have not known peace, and neither have the men and women in our armed forces. While little to nothing changes for most of Britain when we are told that, once again, we are sending troops to far-flung corners of the globe, for those we send, the physical and mental scars are indelible – if they are lucky enough to come home at all.

Marigold reminded the hundreds gathered in Tavistock Square that 'there are always people working for peace' in the world. However bleak the situation may seem, there will always be those who gather, who march, who work their fingers to the bone for peace. It gives me hope to remember this, and to work for peace myself, in the anticipation of a time when war will be looked upon as abhorrent and unthinkable. We have to work for peace, individually and collectively, constantly. As Ms Bentley eruditely tells the crowd, 'peace isn't only important when we are at war.' 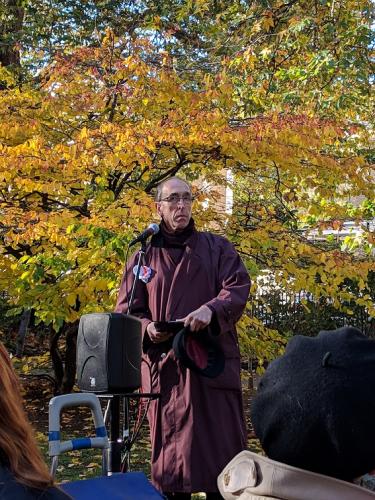 It is always a genuine treat to hear from actor and playwright Michael Mears and Remembrance Sunday was no exception. He chose two stirring pieces to perform, the first an extract from the No Conscription Fellowship's final conference closing speech, given by the chairman Clifford Allen. Allen was a conscientious objector, and contracted the tuberculosis that would eventually kill him in the course of the three prison sentences he served for his beliefs by the age of 30. Mears made a point of adopting Allen's character, his voice gruff and haunted but no less passionate for it. I did not think it was possible to be moved by Allen's words further than I already have been, but Michael's reading of them made me quite emotional. It is a difficult fact of history that our nation, despite being the first in the world to recognise conscientious objection to military service, in practice often tortured, imprisoned and threatened to execute those who wished to do nothing more than follow the directive of their conscience.

Michael's second reading was short, sweet and definitely to the point. Entitled 'Peacetime Haiku' and written by Adrian Mitchell, it says simply

'Try one hundred years, without any wars at all – let's see if it works!'

Those who are regular attendees of peace movement events will know the work of Sue Gilmurray. Her songs 'Road to Peace' and 'The Ones Who Said No' are classics of the annual International Conscientious Objectors' Day ceremony, also held in Tavistock Square. For the centenary of the First World War armistice she has written a new piece, 'Lest We Forget', which I personally believe to be some of her best and most poignant work. The closing line is one we should all take to heart: 'peace values all of us, lest we forget.'

The crowd in Tavistock Square observed the two minutes' silence. It is an emotional moment. Here were many of the descendents of those who worked to resist and end the First and Second World Wars, those who marched to 'Ban the Bomb' in the 1960s, and those who stood against Bush and Blair in 2003, stood shoulder to shoulder with the next generation of peacebuilders.

During the silence I cannot help but remember that over the course of the last century, the developments in human conflict have been overwhelmingly negative. Industrialised war, war in the air and desensitisation to armed conflict through militarism and militaristic language (phrases like “collatoral damage” spring to mind) have led to the creation of a shocking statistic – 90 percent of those who die in war are now civilians; or as I prefer to call them, innocent bystanders. I try to remember the boys who fell in the trenches of the First World War, barely old enough to shave. I try to remember those who were buried in the blitz on London, their homes suddenly reduced to rubble around them. I try to remember the young women in the Congo, murdered so their ancestral lands can be mined. I try to remember today's conscientious objectors, imprisoned in Israel, South Korea and Ukraine. Two minutes is not long enough.

A hundred and four years after it was written, the oft-remembered verse from Laurence Binyon's 'For the Fallen' plays in my mind;

'They shall grow not old

as we that are left grow old;

age shall not weary them, nor the years condemn;

at the going down of the sun and in the morning,

we will remember them.'

It always reminds me that remembrance should not be reserved for a day, a week or a month out of the year. Our past is what makes us who we are; our collective past is what shapes our society. Whether it be the horrors of the Somme or the 2003 Iraq War protests, our history is full of moments that have created our collective consciousness. The more awareness we have of our history, the more we remember, the more likely we are to prevent recurrent tragedies (like pointless proxy wars), to learn from our mistakes (and our achievements) and to evolve into a peaceful society where every single human being is valued. Is that not the point of remembrance?

Flowers are laid, and wreaths of white poppies, on and around the Conscientious Objectors Commemorative Stone. The members of the First World War Peace Forum go first - a long list of organisations, all committed to peace. Laying flowers and wreaths is a small act of kindness, and almost the only one left to us for those who have long gone. The only other thing we can do for those who have gone before us in the struggle for peace is to make the commitments suggested by the Fellowship of Reconciliation and Conscience: Taxes for Peace Not War at the close of the service; to commit ourselves to peace and justice, to use our power to work for a different kind of world, to say loudly and clearly, with one voice – as we did in Tavistock Square that crisp Sunday afternoon –

Rebecca Elson-Watkins is a reporter with Peace News.