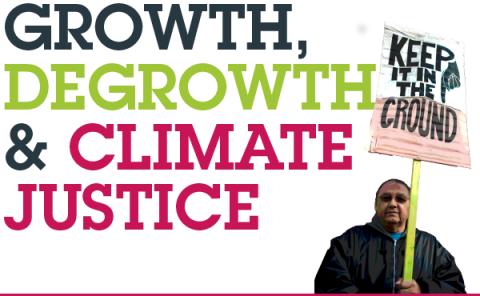 If the financial crisis of ten years ago has taught us anything it is that we cannot leave economics solely to economists. Climate campaigners too understand that the mantra of economic growth is a major obstacle to meaningful emissions reductions. The growth obsession drives ever increasing consumption and resource use. To date, no country has been able to decouple economic output from greenhouse gas emissions.

The audience comprised campaigners for both social and ecological justice. Global Justice Now was the first mainstream NGO in Britain to bring these themes together and make both central to their work. The event also welcomed Green Party and Labour Party activists.

The opening plenary featured Ann Pettifor, prizewinning economist and author of The Production of Money. She spoke about the need to replace growth as the go-to measure of national success or failure. She also proposed reforming lending and borrowing as well bringing offshore capitalism home.

Alongside Ann Pettifor was Jason Hickel, author of The Divide: a brief guide to global inequality and its solutions. He spoke from a more sociological perspective about the need to actively scale down our material consumption by legislating for extended warranties and a right to repair. Perhaps his most popular suggestion was a reduced working week and a redistribution of work.

Following the plenary there were three workshops to choose from:

Degrowth and the global south considered alternatives to GDP (Gross Domestic Product), and how to better measure development and the pillars of a good life. The speakers argued that colonial structures and thinking endure because of the use of GDP.

Post-growth alternatives explored alternative economic models which already exist: Co-ops, the commons and the solidarity economy. The challenge here is to make un-sustainable businesses socially un-acceptable, in doing this we make room for alternatives to thrive.

The final session of the day asked small groups to address the question: What principles should those of us commited to social and ecological justice work to, regarding growth and degrowth? Groups produced some interesting responses, including thinking about degrowth as a civilsational critique and questions about how to apply degrowth to all countries, without imposing one solution: the same for all countries.

The day's round-up concluded that campaigners need to consider language and how that makes people feel. As campaigners we do not need to begin conversations by talking about degrowth but we must demand reductions in resource use and energy consumption, which is effectively the same thing. The event also finished with a strong commitment to honour history, diversity and multiple solutions as well as a determination for a new, positive vision.

Global Justice Now is currently considering the many voices of the day as it drafts its own policies on how to incorporate degrowth into its existing commitments to social and ecological justice.