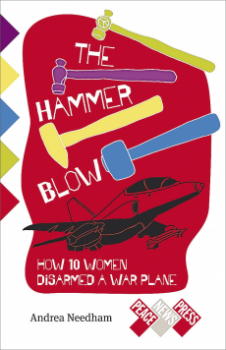 Published by Peace News Press, Andrea Needham's book 'The Hammer Blow' [3], is an inside account of the Seeds of Hope East Timor Ploughshares action, in which four women used household hammers to disarm a Hawk warplane at a British Aerospace factory in Lancashire in 1996 [4].  The plane was about to be delivered to the Indonesian military, for use in their then-ongoing campaign of genocide against the people of occupied East Timor [5].

After disarming the plane, the women waited to be arrested and were subsequently charged with over £2m of criminal damage.  After six months in prison awaiting trial, they were acquitted by a jury in a landmark case which received extensive national media coverage. They were subsequently awarded the Sean McBride peace prize by the International Peace Bureau [6].

The book has already garnered praise from journalist John Pilger, comedian Robert Newman and poet Benjamin Zephaniah [3]. Green MP Caroline Lucas said: 'Anyone interested in social change, or campaigning for peace, should read this book and take inspiration from the brave actions of these amazing women.' [3]

Andrea Needham said: 'We took this action after doing everything we could to stop the sale of these weapons by other means, and a jury found that what we had done was not a crime.  By telling my story, I hope to inspire other people to speak out against injustice, and to show that even when the cards appear stacked against us, we can still win'.