Open letter from the Wretched of the Earth bloc

An important perspective on last November's 'People's March for Climate, Justice and Jobs' 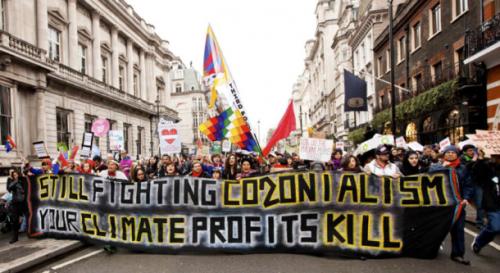 The securing of indigenous rights over land and resources is not only crucial to preventing the key causes of climate change, but also is about doing justice to those peoples most impacted. The protest on the Seine was a clear message of the kinds of devastation already under way due to state-sponsored corporate greed.

The silencing and erasure of indigenous people, and of the vulnerable peoples from the global south (the treaty also features a weakening of the human rights clause), at the climate talks is part of a long history of violent colonialism and racism that is at the heart of climate change.

This form of silencing is not limited to state and corporate powers – it runs rampant as well within the climate movement of the global north. So, before you can begin to claim some empty support for indigenous and global south peoples, we would like to remind you of your treatment of these very people at the People’s Climate March for Justice and Jobs that happened two weeks ago in London.

The climate march in London was led by the Wretched of the Earth, a bloc made up of Indigenous people and people descended from communities from the Global South.

Indigenous delegates who had travelled from the Pacific Islands and from the Sami Nation in Sweden were invited to join the London Climate March after the attacks in Paris meant they could not attend there. Our communities, in both the global south and the global north, bear the heaviest burden of climate change and environmental degradation. This is through the deprivation of water and food, and the destruction of culture and life itself. The impacts of climate change are continuous with, and a consequence of, colonial and imperial violence that sees these lands and lives as expendable. Our place at the front of the march was therefore rightful, because we are from and of frontline communities. 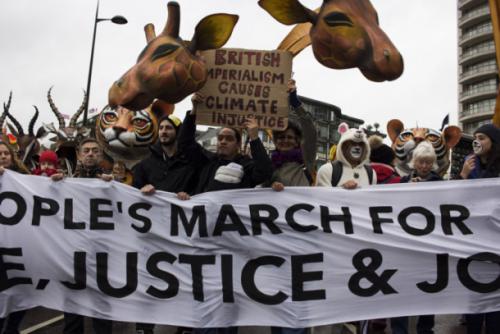 However, like the history of any just cause, our place at the front of the march was not bestowed upon us. It was fought for, behind the scenes, for months, and after much pushback, it was agreed that we would lead the march. However, the agreement it seems was contingent upon us merely acting out our ethnicities – through attire, song and dance, perhaps – to provide a good photo-op, so that you might tick your narrow diversity box. The fact that we spoke for our own cause in our own words resulted in great consternation: you did not think that our decolonial and anti-imperialist message was consistent with the spirit of the march. In order to secure our place at the front, you asked us to dilute our message and make it ‘palatable’.

On Sunday, our bloc arrived at the march only to find that you had organised a most colourful form of sabotage. Our place had been given to a group of people dressed in animal headgear. After having invited the Pacific Island and Sami people to lead the bloc, you then took away the main banner of the march and asked them to hold signs instead. The banners made by indigenous communities were covered up. Signs that proclaimed indigenous and global south communities as the ‘Wretched of the Earth’ and charged ‘British Imperialism causes climate injustice’ were to be removed in favor of those that projected a more ‘positive message’.

This is colonialism at its most basic and obvious. The history of conquest, genocide, and slavery is the foundation of our modern economic system – the very system responsible for the global disaster that is climate change. This is the same history that compares indigenous, black and brown people to animals and treats them as such. The history of colonialism is the ensuing legitimisation of theft, occupation, and erasure.

Your decision to overshadow the indigenous communities’ banner and to replace our bloc with animals indicates at best your historical amnesia, and at worst your own colonial mentality. It also highlights the wilful hypocrisy of the climate movement in the global north: well before you started caring about polar bears and recycling, colonised and postcolonial peoples were already fighting to reclaim and heal their connection with the earth and all its life forms that were so brutally violated by European colonialism and extractive industries.

So, in response to your own colonial tactics, we changed ours. As some of us in the UK say, ‘If they don’t give us justice, then we won’t give them peace’. And so we didn’t. We charged forward to hold our place at the front, we had a sit-in and a die-in, and each time you tried to by-pass us, we ran again. We acted in full solidarity to hold the space for people who had travelled long distances to be present with us at this time of great change. We can therefore proudly claim that the UK’s biggest climate march was indeed led by representatives of the Sami peoples in Scandinavia and of Islander peoples of Melanesia, Micronesia, and Polynesia, as well as black and brown communities living in the UK.

At various points during the march you called the police on us: first by complaining that the coffins we carried to commemorate the victims of environmental and climate genocide were a health hazard. Later, you called on them to kettle us during a brief die-in near BP’s headquarters so that the rest of the march could continue uninterrupted. 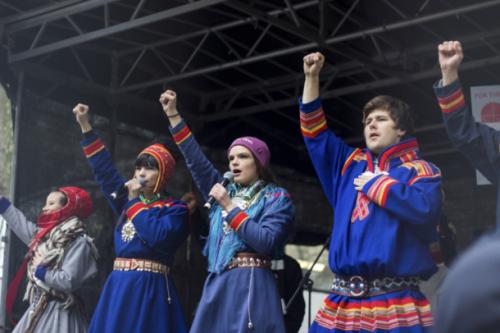 In case you missed it: you, the organisers of the climate march, called on the official agents of colonial and capitalist power to separate indigenous, black, and brown people from the march, portraying us as protesters against the march rather than frontline community members and soldiers for climate justice.

Our peoples bear a long history of resisting colonial domination and erasure in all its forms. The banner that we held while leading the march read ‘Still fighting Co2onialism’, bearing testament not only to this long history but also to our treatment by the organisers of the march. The chants that were heard first as the march headed through the streets of the city were those charging genocide, and demanding decolonialisation as the only viable solution to climate change, ending with the traditional songs of the Sami people.

Your strategy of trying to erase us was continued well by the mainstream media, whose coverage made it appear as though we weren’t even there. You have since made no reference to your numerous and deliberate efforts to sabotage the bloc and deny our message. In fact, you have been trying to ignore us in the hope that our message will simply fizzle out, unworthy of mainstream attention.

All of this is just one of the many ways in which our communities are consistently erased as frontline fighters against climate change. Your attempts to replace the reality of the genocidal impacts of climate change on indigenous communities with bobbing animal-heads adds insult to injury – not because the protection of animals among all life forms is insignificant but because who other than frontline communities can better speak to the utter devastation of flora and fauna on their own lands.

We face an uphill battle in fighting climate change as part of the wider system that has created and enables it – capitalism and colonialism. But what happened at the London climate march is also a clear confirmation that the climate movement itself perpetuates these very oppressions.

The climate movement, in the UK and globally, will be decolonial or it will be nothing. That Sunday in London, the Indigenous communities and Wretched of the Earth bloc proved this: the first to die, the first to fight, the first to march.

A movement that erases, silences and calls the police on frontline communities, those who do most of the dying and most of the resisting, is doomed to fail.

Those who seek to silence us must be held accountable – both, the executives at the top who tell their employees that the clash ‘never happened’, and their foot soldiers who pulled away the banner and tried to take down our placards.

We are angry, but we are not hopeless. We do not want saviours, we know how to fight. Accountability, therefore, does not imply an apology. Accountability is redress and just action. For too long we have been speaking, shouting and chanting, often to no avail. Your active silencing of dissenting indigenous and global south voices has contributed to yet another failed COP. But now, as one of our comrades has noted, we demand: ‘Listen when oppressed people speak’. In the lead-up to COP22 in Morocco, indigenous rights and human rights, as collective rights, must be at the forefront of any climate movement.

To paraphrase Utah Phillips: The climate movement is not white, but it is being white-washed. Indigenous rights and racial justice are not a distraction. They are the heart of climate justice. There is no more time for your dirty games. The clock is ticking.