Call for a National Debate on US 'Regime Change' Policy

'More than 50 State Department diplomats have signed an internal memo sharply critical of the Obama administration’s policy in Syria, urging the United States to carry out military strikes against the government of President Bashar al-Assad to stop its persistent violations of a cease-fire in the country’s five-year-old civil war.

The memo, a draft of which was provided to… 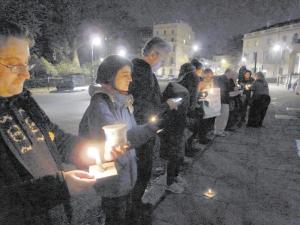 On 10 December, Syria Peace and Justice, a grassroots group formed in October 2013, marked International Human Rights Day with a ‘Peace Pilgrimage’ for the people of Syria.

Two feeder groups visited embassies and offices in central London with a connection to the Syrian crisis (including Downing St and the foreign office) to deliver a letter from the group. The two groups then…

Responding to the situation in Syria

The brutal pace of events in Syria has been hard to follow, let alone to comprehend and to critique. Large-scale nonviolent protests against the regime of president Bashar al-Assad began over a year ago, in March 2011, after 14 schoolchildren were arrested and tortured in the city of Deraa. Their crime was to have written a popular Arab Spring slogan on a wall: ‘The people want the downfall of the regime’. The shooting of demonstrators spread the protests around…