Ziegler One Year On 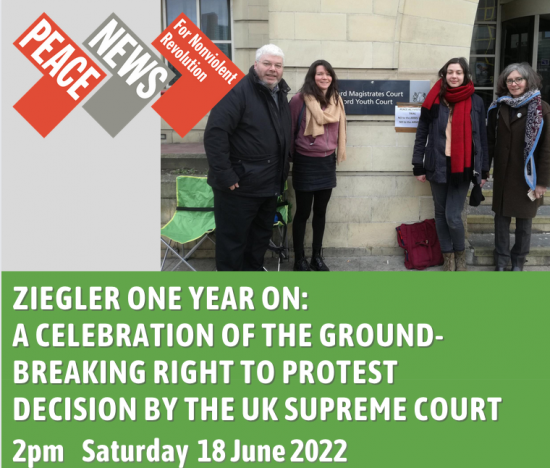 [ADDED 23 JUNE: A video of this event is now available here: https://www.youtube.com/watch?v=UUhjbKtpEvE&t=2553s]

Please join Peace News as it celebrates the first anniversary of the Ziegler decision with the four anti-arms trade campaigners at the heart of the case: Nora Ziegler, Jo Frew, Henrietta Cullinan and Chris Cole – joined by their solicitor, Raj Chada.

On 25 June 2021, the supreme court of the United Kingdom delivered a landmark judgement on the right to protest, ruling that deliberately obstructive protest can be legal. Dozens of direct action cases have already benefited from the Ziegler judgement, including that of the Colston Four.

The supreme court reached their historic decision when considering the case of four Christian peace activists who had blocked the road leading to the DSEI arms fair in London in September 2017.

You can also join by phone if you don’t have the internet: see here for details of how to do this. Please call Claire on 0207 278 3344 for the Meeting ID and Passcode.