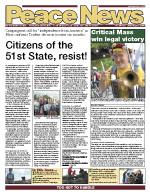 Did the perpetrators who kidnapped Israeli Defence Force soldier Cpl Gilad Shalit anticipate the collective punishment that would be meted out to Palestinians?

Acting together for Iraqi widows

Act Together: Women's Action for Iraq, together with several other Iraqi and British women's organisations, artists and activists, organised a vigil on International Widows Day - 23 June - to draw attention to the plight of Iraqi widows.

First military SOCPA trial due to go ahead

On 1 April 2006, two peace campaigners from Yorkshire were arrested under the Serious Organised Crime and Police Act (SOCPA).

After the party, farewell to the Square

As the crisis in Palestine deepens, civil society groups in the UK have been drawing attention to the plight of the Palestinian people...using somewhat differing methods.

With five days for trade and two days for the public, it's clear where the emphasis of July's Farnborough International "air-show"lies. According to event organisers, the 45th show is "set to be the biggest,most internationally attended aerospace event in the world". However, the arms traders and aviation buffs won't be the only ones attending, as Anna from the Campaign Against Arms Trade reports.

Around 25 citizen weapons inspectors, recruited by the Yeovil, Sherborne and Area Stop the War Coalition, converged on RNAS Yeovilton, the Fleet Air Arm's principal base, on 1 July.

Aimed at people who are fed up with barefaced lies from politicians, big business and the media, and who have had enough of a world where corporate profit comes before life and dignity, Earth First!

Better than the death penalty

Slick advertising, educational and financial inducements, and frequent propaganda events - these are the weapons continuously deployed by the military in their war for our hearts and minds. Genny Bove reflects on how local groups can work practically toc ounter the militarists' deliberately partial picture of life in the forces.

The Other Campaign - "from below and to the left"

In May, regular PN contributor Jess Orlik travelled to Mexico. As the country goes to thepolls for its July general election, she reports on the development of the Zapatista-conceived "Other Campaign", the brutal clashes with police in San Salvador Atenco, and theongoing and defiant teachers' strike - which has seen thousands take to the streets in

EU intervention in Congo: a milestone on the way to a military Europe?

While the focus of western military deployments remains firmly on Iraq and Afghanistan, the EU is busy developing its military identity and capabilities through so-called "peacekeeping" adventures in Africa. Andreas Speck suggests some lessbenevolent motivations for these operations.

No-one is illegal - not even in Essex!

If you live in this part of Essex, the “traveller burden”-- as it has been unceremoniously called- is a hot topic.

On 1 October 2006, Faslane 365 (F365) will be kicking off what organisers hope will be a year of civil resistance at the nuclear submarine base near Glasgow. Peace, justice, environmental and women's groups from Scotland, elsewhere in the UK and a few from abroad, have already committed themselves to bring at least 100 people each to blockade the base during the first three months: more are signing up every week. PN challenged organisers to make the case for why F365 is the campaign people should get behind. Rebecca Johnson responds.

Recently I had the pleasure of seeing Syed Aamir Raza once again. Aamir used to work for Nestle, the world's largest food company and the target of an international boycott because of its aggressive marketing of baby milk.