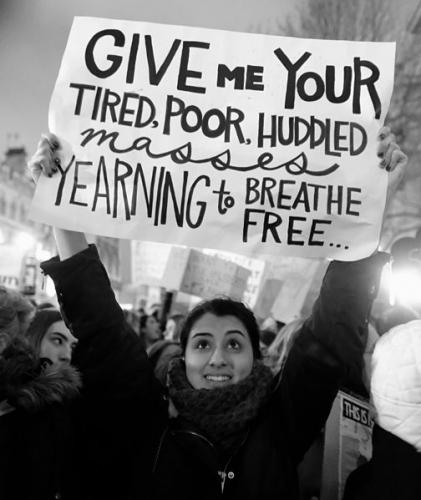 Community is one of those words that carries different meanings to different people. It’s a word that people attribute their own values at times and as such the context it’s used in can be all important. For some, it means the people that live around them. For others, community means the people they choose to surround themselves with, in person or online.

While generally positive, it does have one downside. Like any grouping, it means that no matter how many people fit into a community, some people can feel like they don’t belong there. This is an issue that can be seen frequently when it comes to the subject of immigration. Here in the UK, immigrants, refugees and asylum seekers can easily find themselves on the front lines of a political conflict that they never wished to play a part in, let alone play a starring role.

Although the home office is no longer officially pursuing their  ‘hostile environment’ policy, the programmes set up to enforce and encourage it have not gone silently. In fact, they’ve not gone at all. Policies such as forcing the NHS, banking services and landlords to conduct immigration status checks are designed specifically to make immigrants feel unwelcome. This effect is felt even when they have the documents required to pass the checks. Ask yourself: if you knew that you were legally allowed to reside in your country but were asked to provide proof every time you used a vital service, how long would it take for you to feel like you weren’t wanted? Some people reading this might be asking themselves ‘but what if they weren’t in the UK legally?’

This is an interesting question, and it needs to be addressed in two ways. Firstly, how much does that matter when this type of policy will affect the sense of belonging a person feels regardless of their status?

Secondly, why did that question occur to you in the first place?

'If you knew that you were legally allowed to reside in your country but were asked to provide proof every time you used a vital service, how long would it take for you to feel like you weren’t wanted?

The chances are that it occurred to you because like it or not, the UK public is trained at one level or another to always combine the word ‘immigrant' with the word 'illegal’. Whether it comes from the media or from a political party following a right-wing agenda, this mixing up of ideas can have a dangerous effect. This language imposes a criminal status on people who weren’t born in this country. It also reinforces anti-immigrant prejudices. Quite apart from the impact it has on individuals, this welding-together of ‘immigrant’ and ‘illegal’ also has an effect on communities.

It builds a sense of distrust; distrust towards the people living and working around you every day. So how can a community root this out and learn to create more mutual support in a country where this negative messaging is so widespread?

‘These are our neighbours, let them go!’

Well, the good news is that rejection of anti-immigrant sentiment can be quite simple. In Glasgow recently, we saw an example of the way in which people can show migrants that they are welcome and recognised as valid and valuable members of a community. The UK home office was attempting to remove two men, chef Sumit Sehdev and mechanic Lakhvir Singh from their homes in Kenmure Street. They were suspected of overstaying their visas.

While the men were detained in a van parked in the middle of the street, a crowd gathered, consisting of local residents and others alerted by the Glasgow No Evictions Network. The crowd became a 200-strong protest which prevented the home office’s enforcement efficers from leaving Kenmure Street with Sedhev and Singh. Protesters chanted: ‘These are our neighbours, let them go!’ This rallying cry is where we can find the real lesson in this incident.

A protest, especially one that numbers in the hundreds, is a good visual demonstration of solidarity. At the same time, the messaging used by the protesters is almost more important. It’s crucial to remember the humanity that sits behind the headlines full of phrases like ‘migrant flood’ and ‘immigration crisis’. This is key to reinforcing the reality that refugees, asylum seekers and migrants of any type are no different to anyone born in this country. They have the same wants and needs; they want safety, shelter and a place to belong.

Immigrants usually arrive in new areas as strangers in the community. Unless they have family in the area, it is unlikely that they will have a ready network of support in place for them. As a result, it’s important to ensure that they are able to integrate into the world around them with as few barriers as possible. In order to do that, communities need to look at what barriers there are for people coming to this country and what adjustments immigrants might have to make in order to operate easily in the UK. It shouldn’t be a surprise that language is a major difficulty in day-to-day life for many immigrants – for example, in dealing with healthcare, education and the documentation that is put in front of us all the time. . For this reason, it’s important for local councils and organisations to provide English as a Second Language (ESOL) qualifications free of charge or at a low cost, wherever possible.

It’s crucial to remember the humanity that sits behind the headlines full of phrases like ‘migrant flood’ and ‘immigration crisis’.

On a more personal level, organisations like Counterpoints Arts Company have set up the Refugee Week festival which runs in June each year. They provide packs that enable communities to organise small-scale events that help to celebrate refugees. Events such as this act not only as a visible sign that migrants are welcome in an area, but they also have the benefit of allowing people to gather together. This ability to meet and connect with each other in an open setting is vital to building community links.

Getting to know people can be difficult. It may sound simplistic or even obvious but one of the best ways a non-immigrant can show solidarity and support for immigrants is to get to know them. In learning who immigrants are as people, you, as a non-immigrant, can begin to change the narrative. You can help to break down the idea of immigrants as a single ‘thing’. Instead, they become ‘the people who live next door’, a colleague, a partner or another parent at the school gates waiting to collect their child.

'One of the best ways a non-immigrant can show solidarity and support for immigrants is to get to know them.'

While most people can’t directly influence home office policy or create legislation to make life easier for those seeking to make a home in the UK, it is important to remember that what makes up a community is its people. The way a community feels depends entirely on the actions and attitudes of the people within it. If people band together and make the effort to go beyond the headlines and the language that fuel the hostile environment, they can show their new friends and neighbours that they truly belong.