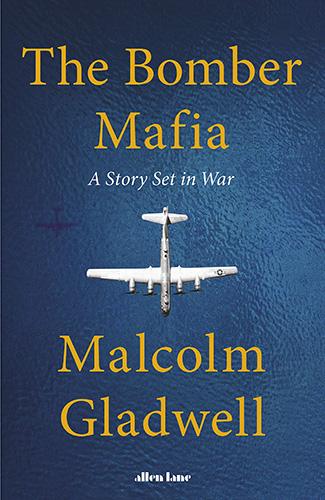 Bob Matthews was an American bomb aimer in WWII. He hit the largest air raid shelter in Kassel, Germany and killed hundreds of civilians. He said, 'I was so distraught that I stayed drunk for nine days and was the sickest drunk in the air force.'   A member of my church, I met him 50 years later and we talked several times. In the end he wrote out his story for me. A humble, family man, he was still deeply struggling with the guilt and shame of what he had participated in. He suffered ‘moral injury’; he had violated his deeply held Christian values about the worth of all persons.

Malcolm Gladwell’s book is an insightful and highly readable introduction to the bigger moral story of British and American bombing policies in WWII.

Gladwell is a Canadian and journalist, who was born in Hampshire, England. His mother was of Jamaican / African heritage and a psychotherapist. His dad was a maths’ professor from Kent, England. Growing up in Ontario, Canada, Malcolm and his family lived among pacifist Mennonites and joined that faith. He has written seven books that sold very well. The first was The Tipping Point (about the 'magic moment' when ideas spread like wildfire), another was David and Goliath (on the triumph of underdogs). He also does podcasts. His latest book is about Allied WWII bombing.  In it he examines the struggle between those who worked for precision bombing and respected noncombatant immunity, and those who went for ‘carpet’ bombing and did not.

The group he calls the ‘Bomber Mafia’ is actually misnamed. They were not the ruthless, heartless ones in the story. On the contrary they were bright, ethical American air force personnel, seeking in the 1930s to conduct a very different kind of war from that of WWI in which millions died. They wanted to go for strategic industrial and military targets with minimum loss especially of civilian life. They placed their technological hopes in Dutch inventor Carl L. Norden’s bombsite that made possible precision high altitude bombing.

This group were the ethical idealists.  Although Gladwell does not say this, they were well within the just war tradition of noncombatant immunity and were determined not to cross that line. In WWII they were led by Brigadier General Haywood Hansell Jr. who commanded day light precision bombing raids first against Germany and later against Japan.

The other group deliberately targeted working class residential areas by, for example, 1000 bomber raids of Cologne, Dresden, and Hamburg in Germany. One story told by Gladwell is that of the deliberate bombing of Muenster Cathedral at midday, just as the people were leaving mass.

In Japan napalm was used for the first time on Tokyo in March 1945 and in the resulting firestorm about 100,000 people died. Again, most were civilians.  One US airman said it was like looking into the mouth of hell. This was repeated in subsequent weeks on 67 Japanese cities.

The dropping of the first atom bombs on Hiroshima and Nagasaki in August 1945 again killed 100s of thousands mostly civilians.

Who were the advocates of ‘carpet bombing’, the deliberate targeting of German and Japanese civilians? Major General Curtis E. LeMay led the campaign of firebombing of Japanese cities. Arthur 'Bomber' Harris led British bomber command. Advisor and friend of Churchill, Frederick Lindemann, believed that mass indiscriminate bombing would break the will of the enemy to fight. It did not.

Precision bombing was nearly successful, but large losses of aircraft and mass produced Norden bombsites not working as well as expected reduced effectiveness. Clouds also got in the way of seeing targets. Mass bombing of civilians at night was dangerously much easier.

Curtis LeMay argued that his firebombing of Japanese cities shortened the war and in the end saved at least American lives and also perhaps Japanese ones. There are some historians that support this position but they have outrageously  abandoned the just war criterion of civilian immunity.

Civilian immunity and the just war tradition died and were buried in WWII. Nuclear bombs are weapons of even greater destruction, killing civilians massively and perhaps ending life on earth. They are not weapons of precision, nor genocide, but omnicide (the total extinction of the human species).

The strategy of mass bombing of civilians lives on. The British governments new policy of increasing its nuclear warheads from 180 to 260 is unconscionable.  I wish Gladwell had considered the ethics of nuclear weapons. I also wish that Gladwell had taken seriously the just war tradition, as this would have given him a robust ethical framework to evaluate all kinds of bombing by.  After all, he is outraged that civilians were deliberately targeted in WWI and refers to Lindemann as a sadist, calls 'Butcher' Harris a psychopath and speaks ill of the pryromaniac chemists who invented napalm. If they were German they would have been found guilty of war crimes at Nuremberg.

Gladwell takes final comfort that in the long run precision bombing had become possible and that is a good thing. But is it? The assassination by a precision drone strike of Qasem Soleimani, an Iranian major general, in January 2020 was on the orders of President Trump. Did it make the world a safer place? Did it violate international law? There are many other drone strike assassinations and many civilians are killed in such attempts. They are executions without due process, crucifixion through the cross hairs of targeting. The ‘War on terror’ has resulted in in over a million death in Iraq according to Physicians for Social responsibility.

Precision weapons are not the answer - only the abolition of war.

Remember Bob Matthew’s story that I began with? Remember the story of the deliberate bombing Muenster Cathedral in WWII at midday as people were leaving the church service?  A devout Methodist navigator voiced what others were thinking in that briefing, 'We did not sign up for this.'  He was told, 'You will be court martialled if you do not go.' So, he went.  No doubt he - and ‘precision’ drone assassinators today - also face moral injury.

Finally, given his background, I'm left wondering where the Mennonite influence on Gladwell is. Perhaps his next book could be on the power of nonviolence?