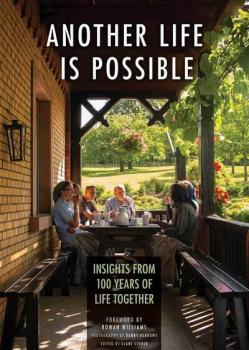 There are activists seeking change nonviolently, protesting, getting in the way, being arrested. From Gandhi and Rosa Parks to Extinction Rebellion, we celebrate their courageous contributions. Then there are communal demonstrators, those whose lives together model a better world here and now. Both activists and communal demonstrators are important. This book is about the Bruderhof, a celebration of struggles and endurance over 100 years of a remarkable communal movement. Today there are 23 settlements on four continents totaling about 3,000 members, ranging in size from households in Harlem, New York or Peckham, London to communities around 300 people in size like Darvell in East Sussex, Beach Grove, Kent, or Danthonia, NSW, Australia.

The story begins in Sanherz, Germany in 1920 – Bruderhof means place of brothers in German. In the chaos and suffering of the end of World War I, threatening communist revolutions, and the moral bankruptcy of many Christians over war and capitalism, Eberhard and Emmy Arnold, their children, and a few others began to live together in full Christian community. They took very seriously the Sermon on the Mount and the example of living all things in common in the early Jerusalem (Acts 2 and 4:32-35). They also drew inspiration from the radical Anabaptists – the left wing of the Protestant Reformation, and later the Hutterians, communal Anabaptist descendants, now farming the prairies in Canada and the USA.

This book tells the stories of 100 members - past - but many present - to mark the centennial of the movement. All the stories are interesting; some are very moving indeed. Bruderhofers experience joys, struggles, and tragedies like everyone else. This is a very human portrait of what life is like living in community. Clare Stober, a member of 30 years, is the one who interviewed and gathered the accounts of so many people. She has compiled a book she wished she could have read when she first encountered the Bruderhof. The photography by Danny Burrows is breath taking, fun, and often poignant. The former Archbishop of Canterbury, Rowan Williams, has written the forward. (By the way, this left wing cleric was with Christian Climate Action and Extinction Rebellion, outside Parliament at the beginning of September).

Many of the people, perhaps a quarter of the story tellers, my wife and I know. We lived in Darvell for a year in 1992-93 with our two young boys. We did not join in the end but remain good friends, celebrating their authentic life although critical on some issues.

Positively, here is an example of communal socialism working very successfully for a hundred years. When we lived there it was a generous socialism supporting a simple life but with many joys including hot showers. Their carbon footprint is low. Heating in Darvell is from their sustainable woods. They have perhaps 6-10 cars for hospital and dental appointments for 300 people. When we were there, there was always ice cream money for medical trips. People walk to work, to communal meals and to their homes. They make their communal income from Rifton handicapped equipment and nursery Community Play Things, stable, socially useful industries, wisely managed now for many years. They also have their own publishing house – Plough Books. The quarterly Plough magazine is excellent. People are cared for from cradle to the grave. I have never seen elderly people so integrated, a part of things, and yet so well looked after. Young families have lots of support. Members do not need to worry about jobs or a mortgage, so the stressors on many families are so much less.

Bruderhof members have not turned their back on the world. They seek to be multi-racial. Their young people take degrees and practical qualifications from plumbing to car mechanics. They reach out to their neighbours. Young people have served refugees on the Island of Lesbos in the Mediterranean, and in earlier times members marched with Martin Luther King in the Civil Rights movement.

There are mistakes and failures also. Criticisms by former Bruderhofers can be found in a March 10th 2020 BBC report at: https://www.bbc.co.uk/news/uk-england-51310036. A more recent documentary, again by the BBC, can be found at: https://www.youtube.com/watch?v=FR4DTHDoMws

Bruderhofers are also self-critical. As a people they tell their failures and mistakes through their history. They would never say they have arrived. So, after 30 years of friendship what would we be sober about? It is not an easy life. Church discipline can be tough, but brings clarity and correction, but it is not for the faint hearted. Families thrive, but in a patriarchal and heterosexual model. I worry about those young people who are not heterosexual. On the other hand, my wife and I have never met so many strong, assertive women in one place.

One definition of (E)Utopia is ‘good place’. Living in Darvell for a year, felt a good place for us as a family. The kingdom of God is demonstrated possible on earth in the pacifist, communal socialism of the Bruderhof. This book “Another Life is Possible” tells that story movingly and wonderfully through the lives of its members. Like any human endeavour, it is not perfect, but the Bruderhof nevertheless is a hopeful and encouraging story. I for one, celebrate their hundred years of existence this year.