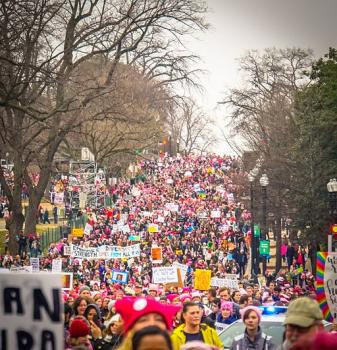 The Transition Integrity Project (more on this below) also warned that a commitment to nonviolence by anti-Trump protesters would be essential in fending off any attempted coup.

Among the grassroots projects, the one closest to PN is Choose Democracy, which has held several massive online trainings on nonviolent action to protect democracy. Choose Democracy has a pledge of resistance if attempts are made to subvert the election, and it has also collected together resources on how other societies have defended against coups.

In September, George Lakey, co-founder of Training for Change (TfC), led an online anti-coup training organised by Baltimore Quakers which he thought was going to be a local meeting, but which was attended by over 700 people from over 20 states. The first national Choose Democracy trainings in late September, led by Lakey and Zein Nakhoda of TfC, attracted over 1,000 participants.

At the time of writing, over 34,000 people have signed the Choose Democracy pledge of resistance. Point 4 is: ‘If we need to, we will shut down this country to protect the integrity of the democratic process’.

Protect the Results is a joint project of Indivisible and Stand Up America to protect the results of the 2020 election.

Dozens of major organisations have joined the coalition, including the Women’s March, the Sierra Club, Republicans for the Rule of Law, Move.On, Greenpeace and 350 Action (the election-focused part of 350.org).

Protect the Results coalition members have already scheduled over 70 events to be held around the US on the day after the presidential election, 4 November – and another 30 protests in the days following.

Hold The Line has published an election protection manual – Hold the Line: A Guide to Defending Democracy – focused on pressuring civilian, police and military officials in every state to protect the integrity of the 2020 election.

These key leaders are asked to sign a four-point ‘Commitment to Uphold Democracy’.

For military leaders, point 4 is: ‘I commit that I will not issue or follow unconstitutional or unlawful orders.’

For state and local election officials (this includes governors), point 1 says: ‘I commit to use my authority to ensure that: every eligible citizen can vote, every vote is counted, and the election results are respected.’

These are only some of the many initiatives taking place to protect US democracy from Donald Trump.

Why the massive mobilisation?

In 2016, Trump denied that he had lost the popular vote by just under three million votes. He claimed that three-to-five million undocumented immigrants had illegally voted for Hillary Clinton in a massive election fraud (that no one could find evidence of – including his own voter fraud commission). So Trump has a track record of denying and ignoring plain and simple electoral facts, which doesn’t bode well if Joe Biden wins the 3 November election.

Trump has repeatedly refused to commit to respecting the result of the 2020 presidential election – he did the same thing in 2016. To take just one recent example, in July, Fox News journalist Chris Wallace asked Trump whether he would accept the result of the presidential election. Trump replied: ‘I will tell you at the time. I'll keep you in suspense. OK? … I have to see. Look, you – I have to see. No, I’m not going to just say yes. I’m not going to say no.’

Trump has claimed – without evidence – that postal voting (called ‘mail-in ballots’ in the US) will lead to ‘fraud like you’ve never seen’, and has demanded an election result on 3 November itself (which could exclude huge numbers of postal votes which can take days to arrive or to count).

This 'mail-in fraud' lie may be the main justification Trump gives for clinging onto power, and the basis for legal action against the election, spreading chaos between 3 November and inauguration day on 20 January 2021, when Trump’s first term comes to an end, under the twentieth amendment to the US constitution.

In 2016, Trump suggested direct action by gun owners (who he called ‘Second Amendment people’) against a possible Hillary Clinton administration. He used federal paramilitary forces against Black Lives Matter demonstrators in Portland, Oregon, in July. The American Civil Liberties Union called the ‘unrestrained brutality’ in Portland a ‘constitutional crisis’. Trump has also called for his supporters (far-right militias, in other words) to ‘go into the polls and watch very carefully, because that’s what has to happen. I’m urging them to do it.’

While George Lakey was one of the first US progressives to warn of the danger of a Trump coup back in July (‘Understanding Trump’s game plan in Portland could be the key to preventing a coup in November’), and the issue broke into the mainstream media in a big way in September with a blockbuster article in the Atlantic (‘The Election That Could Break America’), the first preparations to try to stop a Trump coup came from right-wingers.

Sasha Abramsky of the Nation interviewed two of these anti-Trump Republicans: Charles Fried, who served as solicitor general under Ronald Reagan, and Michael Steele, a former chair of the Republican National Committee, the governing body of the US Republican party. Abramsky's article was called simply ‘Is Trump Planning a Coup d’État?’

Fried, a Harvard Law School professor whose family fled the Nazi occupation of Czechoslovakia, comes close to saying that Trump and his team are fascists. They are ‘certainly racist, contemptuous of ordinary democratic and constitutional norms, and they believe their cause, their interests, are really the interests of the nation and therefore anything that keeps them in power is in the national interest. Does that make you a fascist? It kind of looks that way, doesn’t it?’

Steele doesn’t use this kind of language: ‘This is not complicated. I don’t know why people keep overthinking this man. His goal is to protect himself. He uses the system against itself.’

Steele is furious about Trump’s takeover of the Republican party: ‘I come into your house and shit on the carpet. I tear down your drapes, write on your walls, offend the people who live in the house. Do you leave or kick my ass out? I don’t know anyone who leaves their house without a fight. What kind of America, what kind of country do you want? What kind of leader do you want?’

Steele and Fried and other traditional right-wingers gathered with progressives earlier in the year to consider what they could do if Trump tried to hang onto power despite losing the election.

Some of these folk created the Transition Integrity Project – to protect the peaceful ‘transition’ from a Trump presidency to a Biden presidency, if Joe Biden wins the election.

The four scenarios tested were:

The conclusion of the project, after running and debriefing the four scenarios? ‘We assess with a high degree of likelihood that November’s elections will be marked by a chaotic legal and political landscape.’

TIP added: ‘We also assess that the President Trump is likely to contest the result by both legal and extra-legal means, in an attempt to hold onto power. Recent events, including the President’s own unwillingness to commit to abiding by the results of the election, the Attorney General’s embrace of the President’s groundless electoral fraud claims, and the unprecedented deployment of federal agents to put down leftwing protests, underscore the extreme lengths to which President Trump may be willing to go in order to stay in office.’

TIP warned that the country faced ‘a period of contestation stretching from the first day a ballot is cast in mid-September until January 20.’ As the winner is unlikely to be known on what used to be called ‘election night’ (a phrase that TIP called ‘dangerous’), this long period of uncertainty ‘provides opportunities for an unscrupulous candidate to cast doubt on the legitimacy of the process and to set up an unprecedented assault on the outcome.’

TIP also warned: ‘We anticipate lawsuits, divergent media narratives, attempts to stop the counting of ballots, and protests drawing people from both sides.... We assess that there is a chance the president will attempt to convince [state] legislatures and/or governors to take actions – including illegal actions – to defy the popular vote.’

US journalist Barton Gellman was frustrated that the final TIP report did not say who was installed as president in any of the four scenarios. He rang one of the TIP co-founders, Rosa Brooks, a law professor at Georgetown university in Washington DC, and discovered that none of the planning exercises had produced a clear result.

Brooks said: ‘We got to points in the scenarios where there was a constitutional impasse, no clear means of resolution in sight, street-level violence. I think in one of them we had Trump invoking the Insurrection Act and we had troops in the streets… Five hours had gone by and we sort of said: “Okay, we’re done”.’

One important lesson was pointed out by a TIP participant, David Frum, formerly a speechwriter for George W Bush (Frum is said to have created the phrase ‘the axis of evil’). Frum wrote in the Atlantic: ‘In our exercises... the game-winning strategy was to goad the other side into violence. This was particularly true for Team Trump, whose supporters already fear violence from anarchists and antifa.’

The TIP report concludes: ‘A show of numbers in the streets- and actions in the streets- may be decisive factors in determining what the public perceives as a just and legitimate outcome.... If there is a crisis, almost every strategy to protect the democratic process is dependent on mass mobilization, and in particular, on people taking peacefully to the streets in large numbers, potentially for an extended period.’

In amongst the TIP recommendations is this warning: ‘Peaceful protestors will need specialized training on de-escalation and non-violent techniques – and on how to document the non-violent nature of their protests, given the likelihood that agitators will attempt to blame any violence on them.’