'We need to reflect the science accurately' 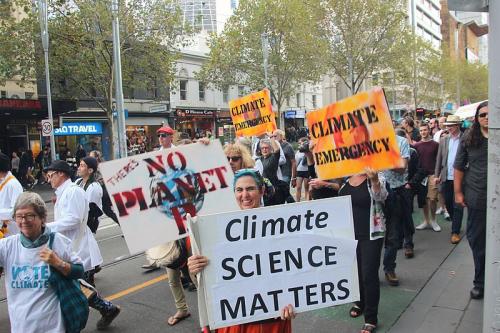 I hope to join at least some Extinction Rebellion events. I'd like to add further cautions, though, that aren't in any way meant to reduce enthusiasm but might affect tactics as regards communication, prompted partly by the talk by Dr Gail Bradbrook on the XR website. I'm a layperson but familiar with some of the climate science (less of the general ecology), and also some of the debates in science communication. In brief, we need to reflect the science accurately but also make those dispassionate facts emotionally meaningful by expressing our own reactions and the values we have in common with our audience, and present positive political and personal options that people can be inspired by and work towards. Climate Outreach's guidance warns that many people are turned off by pictures of demonstrations as well as pictures of polar bears, although this is social science research and a lot of it is uncertain and conditional.

One thing I'd caution against is expressing too much *confidence* that the climate situation is necessarily worse than in the IPCC reports (at least in WG1). The temptation to do this is because the risks are very much downplayed by mainstream media so the more worrying results surely must get a bigger reaction, right? Unfortunately they can lose people in technicalities and fear and may prompt a backlash by the dismissives/contrarians who manage to confuse people.

Sticking to simple messages that the Earth energy budget is out of balance in a way that is understood by physicists for over a century, may be better than concentrating on recent developments. Yes, sea-level rise is tracking the upper end of the IPCC projections, and *may* accelerate dramatically as in James Hansen's paper about superstorms, and the IPCC summaries for policymakers are somewhat diluted by the government approval process. However, arguing that the physical reaction of the Earth system is more dramatic than generally accepted by consensus is in one way as bad as those few political figures describing themselves as 'lukewarmers' who claim illogically that climate sensitivity is at the lower end of of the IPCC 1.5-4.5 range.

The whole point of a confidence interval is that it's hard to rule out anything within it (some scientists informally may say it's probably 3-3.5 °C, but even 1.5 presents a major challenge). Similarly, Hothouse Earth is presented by its authors as a possible chain of tipping points, an additional risk, well-founded but not certain. On the other hand, what we can truthfully say is that we are concerned with the worst cases (and 'tail risk') precisely because they will have the biggest impacts, even if there is also a chance that rich folk can insulate themselves against climate effects and species loss in the short-term. So there are nuances to how we suggest we face certain doom without action, when the action requires things like rebuilding a large proportion of housing in the UK. It's not the science, but translating it into policy where there are problems. The media still discuss the Paris targets without mentioning the 'necessity' for massive projects to suck CO₂ out of the air (CDR/DAC/BECCS), and how that could be achieved politically.

There are various attempted analogies for what is a situation unprecedented in history: climate scientists Andrew Dessler refers to a supertanker approaching icebergs; Michael Mann talks about walking into a minefield and needing to reverse course. I imagine it as a bit like a world in which we're not educating children: things may seem to be going OK for a generation or so, but in reality a huge organised effort is needed, and the more that is done, the better the result. Like extinction, global heating is basically irreversible.

Anyway, I hope the movement can recruit and empower in a sustainable way as well as take actions that make a difference. So XR as a cry of anguish is valid, but in my humble opinion it needs to achieve something too, if only a small win.