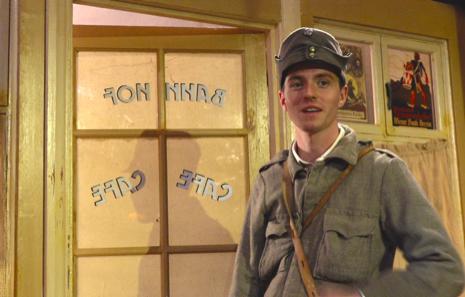 Schwejk (pronounced Sh-wei-ck) is Sands’ own project, shot with the WW1 Centenary in mind. They screen it in the same room in which it was filmed, adding an interesting, atmospheric twist. Based on the famous series of stories by the Czech writer Jaroslav Hašek, Schwejk is a satire on the absurdity of war. Many people have identified with the character of Schwejk since his first appearance in cabaret in 1912; he is just an ordinary young man, sold lies and sent to fight someone else’s war. As a play it has been performed all over the world, from Germany in the inter-war period, to Manchester and beyond, often being brought up to date to reflect contemporary events. Sands’ version is no different, containing references to Iraq, Afghanistan and the so-called ‘War on Terror’.

Schwejk continually uses humour to convey the absurdity of armed conflict. Thus, the film begins with a ‘false start’, with Schwejk in heaven demonstrating the benefits of hindsight. Schwejk talks about drones and collateral damage, before being told ‘you’re off script my friend’.

Taking us through the history of the Triple Entente and the causes of the First World War - including the massive build up of arms across Europe, the excellent research behind the production is evident almost as soon as the film begins.

The character of the Arms Dealer is one that we all recognise from recent wars as he declares that ‘everyone buys from you in peace time … we need peace with just enough fear’. We are told the naked truth of the arms trade: when Vickers developed their new machine gun at the turn of the 20th century, five governments quickly adopted the new technology. Between 1900 and 1910, Vickers received over £1 million worth of contracts for ordnance. The comparison between arms deals to Serbia, Turkey, Greece and others across Europe prior to 1914 , and arms deals in the 1980s and 1990s to Iraq, Libya and the like is not glossed over. They even found an opportunity to poke fun at the current warmonger-in-chief, Donald Trump.

Schwejk’s own daft brand of innocent child-like kindness is made clear when he steals a dog for his commanding officer. Unfortunately for Schwejk, it is the colonel’s dog. His heart was in the right place however, for he only wanted to give his commanding officer a little pleasure in the ‘bloody misery’ of the war.

In his bones, Schwejk is simply a man who wants to see other people smile, and as such he is ill-suited to the horrors of war. Sent to a march battalion for his crime, Schwejk’s comment to his commanding officer sums up the ludicrousness of the entire conflict, and the propaganda soldiers were fed: ‘it will be marvellous when we both fall dead together’.

Lines are continually drawn between current events and past ones: a very successful and poignant attempt by the production team to demonstrate how little humanity has learned since ‘The War to End All Wars’. Parallels between conditions in the trenches and conditions in modern refugee camps, the insanity of proxy wars (how do you tell a Northern Alliance Lord from a Taliban one?), and the ‘punchy expressions’ of war propaganda (‘Your Country Needs You’, ‘Be The Best’ etc...) make you think and laugh, albeit apprehensively.

A rousing adaptation of Wimperis & Finck’s ‘I Don’t Want to be a Soldier’ (itself a parody of the recruitment song ‘I’ll Make a Man Out of You’) asserts that soldiers themselves do not want to go to war, have no quarrel with ‘the enemy’, and are sent only to fight at the whim of others. They pull no punches, telling it straight: ‘all those bloody politicians, who make all the decisions, should come out here and experience how we die’.

The class system does not escape comment from Schwejk either, his innocence once again demonstrating the illogicality of war; ‘it’s important for people at the top to feel important, or how else would the rest of us know what’s important?’ And we are shown that those at the top do not usually know any better than the rest of us (or agree the best course of action) when Schwejk receives many conflicting orders. Most of them are couched in the same sort of rhetoric that we are used to hearing at government press conferences (‘are we looking aggressively enough at aggressive options?’).

The film also never misses the opportunity to relate the First World War to modern conflicts. With a nod to America’s wars in Iraq and Vietnam, we are reminded that starting a war is easy, but that getting out of a war takes real skill. And the old lie that soldiers will be ‘welcomed as liberators’ (whether in Galicia, Paris or Baghdad) is repeated, and believed by the naïve and gentle Schwejk.

But we know that war is really a ‘great service to the manufacturers of bullets,’ not ordinary people: ‘Everyone’s got the Maxim machine gun … so effective everyone’s saying it would stop a war as soon as it started.’ Just as it was with dynamite and nuclear weapons, the endless cycle of arming and counter-arming is shown for the madness it is when an ostrich egg (proudly on display in the Sands building) is introduced into the proceedings. One character explains that the the enemy should be told that it will explode and eliminate the Western World: ‘It’s called a deterrent boys … the whole point of [a] deterrent is that nothing happens.’Dossiers and reports are generated to convince everyone that the ostrich egg is a weapon of mass destruction.

The inconsistency of war is one of the closing points – how we leaflet, then bomb, then drop aid on our ‘enemies’. But the film closes with a salient point for the peace movement:‘you have to stop a war before it starts.’

Despite Schwejk’s (often very funny) innocence and naivety, this film remains a scathing critique of war, the arms trade, and the class system. It is well-researched, well-acted, and thought-provoking. If you see one independent film this year, make it The Good Soldier Schwejk.