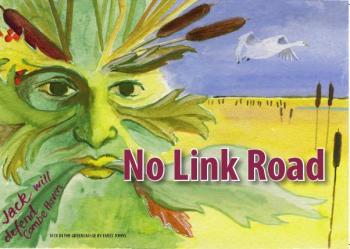 Her trial is part of a larger issue. With the Combe Haven Defenders, she is fighting against the Bexhill Hastings Link Road and the Department of Transports’ refusal to release crucial economic information. “It is a local way to tackle national issues of climate change and sustainable transport,” Johns said.

The Bexhill Hastings Link Road is the first of 190 planned roads to be built across England and Wales in the coming years. A total of £113 million has been committed to the Bexhill Hastings project, according to the Campaign for Better Transport, and construction leads the road through a valley with “exceptional tranquillity and beauty,” Johns said.

Anti-road activist Andrea Needham said the road will cut through the countryside between Bexhill and Hastings, to allow the county council access to build housing and industrial buildings.

In late 2011, the secretary of state for transport ordered a study to examine whether or not the road would be useful and worth the public funds.

The document was not released to the public upon completion, prompting activists to make a Freedom of Information Act request for the report. When it was delivered, the portion with the recommendation had been redacted. Members of parliament and department for transport officials were also denied the full recommendation.

“There was a blocking of access at all levels,” Johns said.

In March of 2013 activists delivered a letter to the DfT stating they would give officials one month to release the documents before citizens came to collect it themselves. After receiving no reply, the group organised an event for 8 April 2013.

Activists met outside the DfT building in London to peacefully request the unredacted document be brought out to the group or that they be given entrance to find it themselves. In court, Johns testified that, after keeping protesters orderly for the better part of the morning, she took up station at the door of the DfT for the afternoon. She requested that she be given the document or entry, and handed leaflets to employees passing through the doors. After two warnings from police officers on scene, she was arrested for aggravated trespass.

Johns’ group of about seven supporters discussed the situation in the court lobby while they waited for the proceedings to begin. If she wasn’t guilty of aggravated trespass, then the second charge seemed unreasonable and slightly ridiculous, they said.

The situation was a tricky one. Johns was charged under the Criminal Justice and Public Order Act, section 69. To defend herself using the statutory defences in the Act, she would have had to show “a) that [she] was not trespassing on the land, or (b) that [she] had a reasonable excuse for failing to leave the land as soon as practicable.”

To issue the order, the officer did not need to be correct in charging her with aggravated trespass but instead needed to “reasonably believe” that he was correct.

Johns never expressly asked the responding officers about their grounds during earlier cross-examinations, a fact the judge pointed out during sentencing. However, the officers did testify that her conduct was “very joyful,” as well as “calm and peaceful.” Johns argued this proved the officers thus understood at the time of arrest that her behaviour was not “obstructing”, “disrupting” or “intimidating” any lawful activities, as the legislation specifies.

“If his belief was not reasonable, then his order for me to leave was itself unlawful and I must be found not guilty of the offence,” Johns said in her closing trial remarks. The judge found her guilty of disobeying the officer’s orders but gave her a conditional discharge: she will suffer no punishment if she is not found guilty of any other offence in the next 18 months.

Before this week, I had only ever been to mock trials in New Jersey county-level courts, both criminal and civil, as an US secondary school student.

In comparison, much was the same in the UK. All rise when the judge enters. Members of the public may observe the proceedings. Witnesses swear in and are examined using similar phrasing. But what was most strikingly different about this trial was that Johns did not hire legal counsel.

Johns did have Needham, an old friend who helped set up the Activist Legal Project, serving as her McKenzie Friend – a British provision which allows someone conducting their own case to have another person sit in court beside her, giving her advice.

“It’s nice, if you are representing yourself, to have somebody sitting in the court with you, to talk things over with,” Johns said in an interview.

I was surprised by Johns’ decision to represent herself in criminal court, mostly because I had never before met any layperson who had chosen to do so. This revelation made me quickly realise my awe stemmed from common US assumptions about the legal system.

In a US criminal court, the accused has the right “to have the assistance of counsel for his defence,” as per the Sixth Amendment to the Bill of Rights. Upon arrest, the accused must be reminded of this right and that, if he cannot afford counsel, a lawyer will be provided for him at the government’s expense. The Supreme Court has ruled this right applies to federal and state courts, and guarantees the accused an “effective lawyer.”

Growing up in such a system, I always assumed it was the natural way of doing things. Johns’ case showed me, however, there can be success, as well as purpose, behind forgoing legal counsel.

“If you have a barrister, you feel very powerless. You are just a spectator of your court case,” Johns said. Without legal counsel, she felt she had a better opportunity to explain the crucial politics behind her defence.

“It is common in political cases, I think partly because … it means that you can address the court about political things a barrister wouldn’t be happy to address. They are there to get you free or found not guilty,” Johns said. “But if it is an action for political reasons, being found not guilty may not be the purpose of the court case.”

Needham explained that, although Johns had a legal defence, the purpose of her trial was political – specifically to draw attention to the issue of government accountability for the transparency of spending decisions. The document in question was actually eventually released; only to show it did not give a recommendation either way.

Needham and Johns agreed that the trial and the demonstration were part of a larger national political picture.

“I think that things like transparency and accountability only occur if the public is pushing it,” Johns said. Before she was sentenced, Johns expressed this sentiment to the judge, saying, “It was the right thing to do. Calling the government to account is sometimes the higher law.”