I stand with Margaretta D’Arcy

Carol Fox on the background to Margaretta D’Arcy's latest imprisonment ... 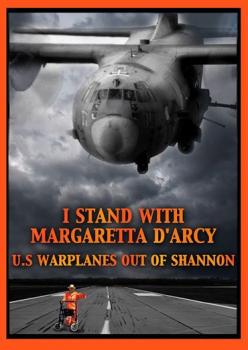 On Wednesday, January 15th, 79-year old Margaretta D’Arcy, writer, member of Aosdana which honours outstanding contributors to the arts in Ireland,  and widow of the late playwright John Arden, answered a knock on the door of her small Galway City terraced house. It was the Irish police. She was arrested and ferried by squad car to Limerick Prison to serve a three month sentence. Her crime: failure to sign a bond pledging to no longer trespass onto unauthorised areas of Shannon Airport.

Margaretta D’Arcy has been arrested twice for sitting on the runway at Shannon. Her first trial in December at Ennis District Court in Clare, found her and her co-defendant, Niall Farrell, guilty of interfering with the ‘proper’ use of Shannon Airport. Their second trial – the same charge,  – will probably be held next month. The defendants’ main argument is that Shannon Airport is not being ‘properly used’. It is supposed to be a civilian airport, yet it is being transited by US warplanes, military cargo and troop carriers as well as by planes implicated in the infamous ‘rendition’ flights, involving the kidnapping and transporting of people to secret detention centres for ‘interrogation’. Opinion polls have consistently shown that the vast majority of Irish people are opposed to Shannon being used by the US military.

Ireland  -- purportedly a neutral state – has allowed over 2m US soldiers to pass through Shannon Airport in the past decade, most on their way to wars in the Iraq and Afghanistan. Between January and September last year,  366 foreign military aircraft were allowed to land. The US Government is quite clear about the strategic importance of Shannon. A US Embassy briefing document in 2006, revealed by Wikileaks, stated that Shannon’s geography makes it a ‘key transit point for military flights and military contract flights carrying personnel and material to Iraq and the Middle East/Gulf theatre in the global war on terror, as well as to Europe and Africa’.

The Irish Government’s  rules on such flights are that the planes must be unarmed, carry no arms, ammunition or explosives. They must not engage in intelligence gathering ,nor form part of a military exercise or operation. The Irish have told the Americans what the rules are and expect the US authorities to conform. This is taken on trust. There are no checks.

There have been some embarrassing moments. The build-up to the Iraq War in January 2003 provided one of them. When US soldiers were seen at Shannon Airport  (and reported in the Observer newspaper)  carrying guns, the Irish Government had to implement a quick rule change: personal weapons were allowed but they weren’t allowed to have bullets. In September last year, when an attack on Syria seemed imminent, a US AC130 gunship with its 30mm side-mounted cannon in clear view, appeared on the runway at Shannon. The Irish Government complained but accepted the US Embassy’s assurances that this was an ‘isolated incident’ and the result of an ‘administrative error’.

Planes implicated in extraordinary renditions have also graced Shannon’s runway. Again, the planes have never been searched, despite revelations in Wikileaks that Ireland’s former foreign minister, Dermot Ahern, told the US Ambassador that he was ‘quite convinced’ that at least 3 flights involved in renditions had refuelled at Shannon. This was while the Minister was assuring the Dail and the Irish public that there was no need for concern. Many groups including the European Parliament, and the Council of Europe, have called on the Irish Government to institute an ‘inspection regime’ for such planes, something it is still resisting.

D’Arcy’s and Farrell’s first trial was complicated by the fact that an Aer Lingus and Ryanair plane had to circle overhead for 15 minutes because the two protesters were on the runway. This had not been intended. The two had been on the runway in daylight for half an hour, dressed in fluorescent Guantanamo Bay suits and carrying placards without being detected. They eventually rang the airport security on their mobile phones to inform them of their presence. The defendants were not the only ones on trial as the security systems at Shannon were also under heavy scrutiny, particularly given the military nature of much of Shannon’s traffic.

A campaign has now been launched for the release of Margaretta D’Arcy from Limerick Prison. Many artists, writers, her colleagues in Aosdana and a former UN Assistant Secretary General have spoken out on her behalf.  And the weekend after her arrest, Margaretta was visited by her old friend, Sabina Higgins, the wife of the Irish President, Michael D Higgins. This has caused some controversy, ensuring that  Margaretta’s case has remained in  the media.

But she has stated that the real call should be for the release of Shannon Airport from the US military, that the reason for her imprisonment should not be forgotten.