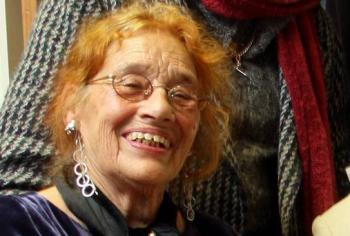 On Saturday 25 January, Zoe Lawlor and John Lannon of Shannonwatch visited Margaretta D'Arcy in Limerick Prison. She has been there now for 10 days, as a result of her conscientious refusal to sign an undertaking that she would stay away from the restricted areas of Shannon Airport. She has made it clear that she has no problem signing a peace bond - after all, peace is what she is campaigning for. However, the runways at Shannon Airport are directly linked to crimes against humanity, and Margaretta has made it clear that her integrity would be violated if she undertook not to confront this improper use of the runways of a supposedly civilian airport in a supposedly neutral country.

During the visit Margaretta was told of the great support there is for her and her principled stance against the state's collusion in US war crimes. She was brought photographs and reports of demonstrations in Galway, Limerick, Dublin, London and Bil'in in Palestine, as well as a selection of some of the many articles written about her since her imprisonment. She was pleased that the issue of the U.S. military use of Shannon was being highlighted, and expressed her thanks to everyone who has shown their support.

Margaretta was in good spirits and talked passionately on a range of issues. She once again referred to the unsatisfactory conditions in the prison, and of the state of ongoing sensory deprivation that the prisoners have to contend with. The impact on the women who are imprisoned is something she said that needs urgent attention. She noted that while plenty of research is being undertaken in relation to prisons, with prisoners often being passive subjects, there was little active engagement with prisoners themselves and very little being done to address their needs.

Margaretta was pleased to hear that 15 MEPs from 8 different countries had written to Minister for Justice Alan Shatter calling on him to release her. This is something he could do since the government has it within their power to allow a Presidential pardon. However the question of whether or not she could accept a pardon would depend on what it was for, she said. She referred to the fact that she and others can stand outside Shannon Airport at the regular monthly vigils witnessing complicity in crimes. "When I went onto the runway I did so to stop those crimes" she said. "It would seem that it is ok for me to witness crimes, but not to do something to stop them. This is something the Minister needs to explain."

Margaretta also spoke of the irrelevance of age when it comes to taking action to stop injustices. "A person's age is not relevant when it comes to taking action" she said. "I may have fewer commitments to family now than a younger person would, and this gives me the opportunity - as well as the duty - to act. It's important to realise that people can be effective regardless of age".

Margaretta also spoke of the important role of women in conflict resolution. In particular she spoke about UN Security Council resolution 1325 which refers to the disproportionate and unique impact of armed conflict on women and recognises the contributions women make to conflict prevention, peacekeeping, conflict resolution and peace-building. The resolution stresses the importance of women's equal and full participation as active agents in peace and security, and this is something that Margaretta herself is passionate about.

The Shannon Watch activists who visited Margaretta were struck once again by her energy, humanity and integrity. "As always, she is concerned about the goal, stopping Ireland's shameful collusion with US war crimes through allowing the military to use Shannon warport, and also about the conditions of the women prisoners in Limerick which are very poor" said Zoe Lawlor. "It is always a pleasure to spend time with a woman of such conviction."