Report and images from Trident Protest at Rolls Royce AGM.

Rolls-Royce directors were confronted with the harrowing testimony of a Hiroshima survivor, Setsuko Thurlow, at their AGM on 1 May. Although the quote was lengthy, the chair was too disorientated to interrupt, and the board responded with nervous laughter.

Rolls-Royce provides power systems for Britain's Trident nuclear-powered, nuclear-missile-carrying submarine system. In June 2012, Rolls-Royce was awarded a £1bn contract to produce new reactor cores for the submarine that is intended to replace Trident.

At the Rolls-Royce AGM, Sheffield peace activists asked about the impact of a nuclear strike on shareholders, alternative uses for Rolls-Royce technology such as green energy, and whether taxpayers would have to pay for the lost investment if the Trident nuclear submarine system is not replaced. At the end of the AGM, activists held up banners saying: ‘No Trident’ and ‘Trident Kills’.

This is the full wording of Setsuko Thurlow's testimony, read at the AGM by Heather Rostrum:  'Although it was morning, it 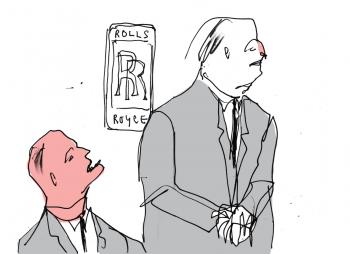 looked like twilight because of the dust and smoke in the air. People saw the mushroom cloud and heard a thunderous roar. I did not hear the roar, just the deadly silence broken only by the groans of the injured. Streams of stunned people were slowly shuffling from the city centre toward nearby hills. They were naked or tattered, burned, blackened and swollen. Eyes were swollen shut and some had eyeballs hanging out of their sockets. They were bleeding, ghostly figures like a slow-motion image from an old silent movie. Many held their hands above the level of their hearts to lessen the throbbing pain of their burns. Strips of skin and flesh hung like ribbons from their bones. Often these ghostly figures would collapse in heaps never to rise again. With a few surviving classmates I joined the procession carefully stepping over the dead and dying.'