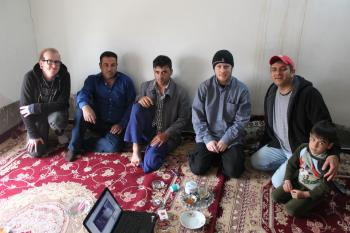 Back in November I wrote a blog piece for Peace News about what was essentially a media blackout on cross-border attacks by the Turkish military into the northern regions of Iraq. These Turkish attacks into Iraq have a long and deadly history, taking and disrupted many lives and have historically, in the main, been largely under-reported or simply unreported. It is in part due to this lack of coverage and critical challenge in the media that these attacks have been able to continue, resulting in more lives being lost and torn apart. As such, it is more than unfortunate to report that Turkish cross-border bombings have continued in the months since.

In writing the blog in November last year I cited a human rights organisation that have a team based in Iraqi Kurdistan, Christian Peacemaker Teams (CPT), who had met with one of those who was injured during the Turkish bombings in November, Rebaz Ahmed Ismail. At that time only the wire agencies had carried news reports on the deployment of Turkish ground troops into Iraq, an event that is now relatively rare as most of the attacks are carried out from the air, and even then these agencies misreported the fact that civilians had indeed been killed during these attacks; CPT reported the day after the attacks that at least two civilians had been killed in a single Turkish bombing raid along the Iraqi border with Iran.

The last time I myself was in Iraq was in April-May 2009 and I had gone specifically to support the work by international NGOs to document these cross-border attacks that were claiming the lives of many and disrupting the livelihoods of even more who farm and herd animals on the grasses high in the Iraqi mountains. The lushly green covered mountains offer grazing, particularly in the summer months, when the lower lands become arid due to the heat. One only has to look at a map to see that the Turkish-Iraqi-Iranian border region of Iraq is mountainous and fertile compared to the rest of Iraq which is mainly flat and outside the banks of its two major rivers distinctly lacking in plant life. One of the people I traveled to Iraq with in 2009 now works full time in Iraqi Kurdistan and was one of the CPT members that met with Rebaz, who lost a leg and two friends in an F16 fighter-aircraft attack in early November 2012.

When I wrote the blog piece in November this personal connection through a friend and colleague to this murderous event gave me a grounding and an insight into it that meant it wasn't simply a horrific event that beyond human empathy and compassion I was abstracted from, instead it became tangible and visceral, that writing about the media omission on this issue was not simply an academic issue propelled by compassion alone. Not only had I previously met people who had experience similar bombings and been to the sites of such events in northern Iraq but CPT's work gave voice and a name to someone who would have otherwise been an unknown victim; Rebaz himself is no victim, rather someone directly affected by these cross-border attacks, his dignity and courage in the face of such is utterly compelling.

I can say this with authority now because I am privilege enough to have just returned from meeting Rebaz and his family at their home. Neither upon my return to Iraq on Sunday, nor before hand, had it crossed my mind that I would be in a position to meet the man I had previously written about.

The refrain I heard the most from him was that he was not seeking compensation or financial support nor was he seeking help to receive either of those things following the attacks but instead that he was trying to do what he could to help those who have also been affect by the bombings as well as to do what he could to prevent them from continuing. 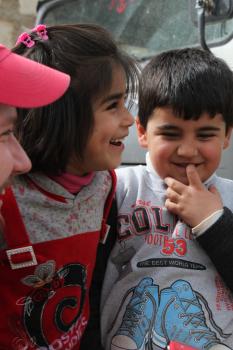 Rebaz has two children, a daughter who is seven and a son who is six. My niece is also seven years old. Sitting watching Rebaz's daughter, it shouldn't come as any surprise and yet if often does, I couldn't help but see similarities between these two seven year old girls. As soon as the phone rang Rebaz's daughter, just like my niece back in the UK, sprang into action to answer it and proudly handing it over to the owner; similarly my niece's command of the tv remote and engagement with my laptops mouse once the screen saver kicks in was mirrored in Rebaz's little girl's actions in the time I spent with them. Both these young girls are inclined to smile and be playful and the cheeky grin etched across Rebaz's daughter's face when we were playing and taking photographs outside reminded me of my niece. On all my trips to Iraq I've been struck by the similarity in action been those I've met and those I've temporarily left behind at home and the disjuncture between the context, that if the same things, be it ill health during the sanctions years or Turkish bombings today, happen to my loved ones back home the outcomes and consequences would be widely divergent to those here in Iraq.

Indeed, I made this very point in the press release I sent out in 2009:  "There's nothing in life I enjoy more than playing with my beautiful niece and seeing her smile, to know she is safe. I don't think these simple pleasures should be determined simply by where you happen to have been born."

This might seem obvious, that we are all human and deserve the dignity and rights that innately come with being human regardless of race, gender, location etc. The reason I mention these things is not only because it humanise him, his plight and his family but precisely because although such things are universal in theory, their application is not. Indeed, Rebaz asked me directly what would happen if a plane from another country came and bombed Britain and killed people. It was a rhetorical question, that although I answered it, it actually required no answer. In Iraq, nothing happens, except that is to say the continuation of the bombings. 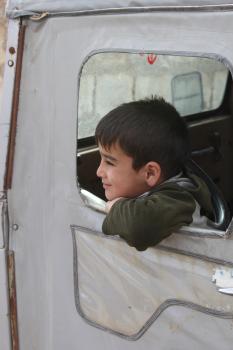 Rebaz lost his left leg below the knee in the Turkish attack that also killed two friends of his and wounded another. Incredibly, due to his own diligence and determination, Rebaz survived the attack. I've seen photos of the immediate aftermath of the attack, including the remains of his leg, and it is truly remarkable that he survived; upon coming around having been knocked unconscious in the blast that so savagely took his leg he was able to put pressure above the wound on the main artery in his thigh with one hand whilst taking his belt off with the other and using it as a tourniquet. He then drove himself to the nearest hospital that was a considerable distance away.

What is kind of perverse about it is that what saved his life, the reason why he knew what to do in these circumstances, was sadly because he had previously had to deal with others who had be brutally injured in a similar fashion. Indeed, as the previous Peace New blog on the issue mentioned, these cross-border bombings and attacks have a long history.

The attack itself took place at about 01:00 on 7 November, 2012 when numerous Turkish military jets attack the group that Rebaz was traveling with to transport goods over the mountain between Iran and northern Iraq whilst they were asleep. The group had been using this specific road into Iran for at least three years to transport goods between the two countries. Whilst it is common for people in this part of Iraq to be armed, Rebaz emphasised the point that none of the group that were attack were in fact armed.

In relation to the historical nature of these attacks, some quick examples would include the period following the end of the Gulf War and the creation of the ‘safe haven’ in northern Iraq above the 36th parallel. The first Turkish aerial attacks came on 4 August 1991 continuing until 15 August with Turkish fighter jets completing 132 sorties over northern Iraq with a second wave of Turkish attacks beginning in early October 1991.(1) By 1992 such Turkish airstrikes became “a regular occurrence” on both sides of the border since which time, and as Andrew and Patrick Cockburn have reported, “Turkey had been routinely sending military expeditions across the border” into northern Iraq.(2)

In October 2011 Turkey launched a large scale military operation of “10,000 troops backed by warplanes”, drones and helicopters. The “22 battalions of elite commando and special-forces troops” crossed the border into Iraq in what was described as “one of its largest military operations in years”.

The virtual media blackout in November 2012 on these cross-border attacks was framed against an escalation in violence, with Reuters reporting that the “past few months have seen some of the heaviest fighting".

In relation to the current period of Turkish cross-border bombings, perhaps the most significant element is the disclosure that in 2007 the US had begun providing real-time intelligence to Turkey in relation to Kurdish movements in northern Iraq. Indeed, according to a US military official quoted in a Washington Post article entitled ‘US Helps Turkey Hit Rebel Kurds in Iraq’ in providing such intelligence the US is “essentially handing them [Turkey] their targets”

Almost immediately after this intelligence sharing between the US and Turkey began Turkey launched the biggest military operation into Iraq since the 2003 invasion which included airstrikes penetrating deep into Iraq, with villages targeted “up to 60 miles from the Turkish border”. Talking to members of CPT, who have extensively documented such attacks across northern Iraq, attacks of a similar depth into Iraq have long since continued, indeed, the attack that took Rebaz's leg is one such recent example.

Human rights organisations have reported that 40,000 people have been killed and numerous human rights abuses have been committed in the on-going conflict between Turkey and the PKK.

Whilst peace talks are currently being held between Turkey and the PKK, including the recent release of eight mainly military Turkish hostages by the PKK which is a significant step that has yet to be reciprocated by Turkey, as a recent editorial on the issues pointed out, "Optimism has broken out prematurely several times in the past 30 years of conflict between the Kurdistan Workers' Party (PKK) and Turkey." A lasting and stable peace is most certainly what is required and whilst I remain hopeful that this current round of peace talks are successful, what currently needs to happen is for Turkey to stop its cross-border attacks that are killing and maiming civilians in Iraqi Kurdistan. Even during periods when bombs are not raining down, the ever present nature of these attacks produce a tension and uncertainty that in of itself is disruptive and emotionally distressing.

Unbeknownst to many, including myself before I first traveled here, inside northern Iraq there are a number of Turkish military bases and outposts. The presence of these bases are strongly contested by the people of Iraqi Kurdistan, especially those in the border regions, but the Kurdistan Region Government (KRG) that administers this part of Iraq have shown open support for them in renewing their presence.

The security implications and emotional impact of having such a foreign military presence in northern Iraq given the context of the cross-border bombings and border incursions by military personnel is significant and has been documented by CPT.

The most recent CPT report on cross-border attacks is available in both Kurdish and English.

The previous CPT report on this issue is available here.