Following a brutal arrest and an IPCC complaint being upheld, Mani Hamid is seeking a movement to support victims of miscarriages of justice. 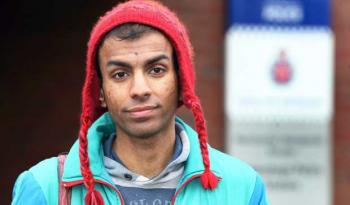 The Independent Police Complaints Commission (IPCC) have upheld Mani Hamid's complaint – “the police had wrongfully arrested him, assaulted him and violated his human right to protest.” (please see back history below (1)). He is currently pursuing prosecution of the police for misconduct and solicitors for negligence. Mani is teaching himself about Human Rights law and is determined to take these cases up to the International Human Rights courts.

Any Peace News reader with any knowledge of human rights law, solicitors' negligence or police misconduct please contact Mani on the email provided at the end of this article.

Mani believes that the following human right articles of Universal Declaration of Human Rights have been breached in the two on-going cases:

Article 1) All human beings are born free and equal in dignity and rights. They are endowed with reason and conscience and should act towards one another in a spirit of brotherhood;

Article 2) Everyone is entitled to all the rights and freedoms set forth in this Declaration, without distinction of any kind, such as race, colour, sex, language, religion, political or other opinion, national or social origin, property, birth or other status. Furthermore, no distinction shall be made on the basis of the political, jurisdictional or international status of the country or territory to which a person belongs, whether it be independent, trust, non-self-governing or under any other limitation of sovereignty;

Article 3) Everyone has the right to life, liberty and security of person.

Plus 12 more articles of the same Convention of Human Rights!

Mani feels strongly that the UN need to exercise more power in peacekeeping around the world and that more people should take their cases up to this international level. We need to fund peacekeeping more, as globally at the moment much more is spent on war making. Mani has a vision, that it would be brilliant if there was an organisation that could give financial assistance and practical support to people/activists who want to take their cases to the human rights courts. If anyone knows of an already existing organisation of this kind please let Mani know or it there isn't one then maybe we as a peace movement need to create one through firstly workshops and debates and through helping each other.

For 2013 Mani wants to connect with other victims of miscarriages of justice cases and hopefully unify our battle for justice for all, through a unified petition to the House of Commons and House of Lords for a transformation of the (in)justice system to a Human Rights respecting system. Mani is in regular contact with his MP trying to hold them accountable.

Recently Mani has had a response letter from the Manchester Evening News about Mani's complaint that details were not correct in their article about his arrest outside Vodafone in 2011 (please see back history below (2)) and is hoping to get them to do a reprint as the paper says that they are obliged to do that should information be found to be wrong.

Please find below the slightly amended back history which I had blogged about back in March 2012:

Usman Hamid (affectionately known as Mani) has protested for a long time often as a single protestor with hand-written placards and also in groups, and always, always peacefully. The Manchester Evening News (M.E.N.) covered his story on Thursday February 16th 2012 to be exact.  (1)They were correct in saying that Mr. Hamid had stood with fellow protesters in Piccadilly Gardens on Armed Forces day June 2011 holding a placard; but wrong in saying it featured an expletive. The placard had read “Bombing for Peace is like F*****g for Virginity” (The censoring stars were included).

The article stated that Mr. Hamid grappled with the police which is untrue. He wasn't given a reason for his arrest so he did resist arrest and was pushed, pulled and violently dragged, sustaining multiple injuries. The M.E.N. also stated that Mani was protesting against the war in Afghanistan which he refutes. He was merely making a philosophical statement. The case was cleared on appeal after Mr. Hamid had to represent himself in court having had three different solicitors let him down. The judge stated that there was no case to answer so his fines were dropped. The judge was asking why the CCTV footage was only showing when the police came onto the scene and not the peaceful protest prior to the arrest, and Mani noted that there was no footage of the brutal arrest itself and his violent treatment. Also Mani is now putting in a complaint about not getting seen by a nurse while in custody to have his injuries looked at.

(2) Mani then faced a second court case on the 16th March 2012 about a UK Uncut action which took place in the summer of 2011, to be exact on 14th May 2011, in which he and some others were attacked outside Vodafone. I find this reprehensible as Mani is not a tall man and wiry of build. He is very smiley and a holistic therapist by trade, and also studying Nursery nursing/Child development so as you can imagine was not aggressive or confrontational in any real sense. He made a small leaflet to garner support for the trial.

For those with the knowledge mentioned, Mani Hamid can be reached via email: healing_hands19@yahoo.co.uk