A play written and performed by Tayo Aluko. 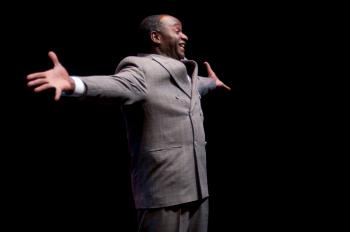 If you get off a train at East Croydon, you may well gaze around and wonder which of the towering office blocks is the infamous Lunar House that ‘processes’ foreigners and refugees; the building that decides who is welcome in this land and who is not. Look around and you will find, overshadowed by the rise of concrete, The Warehouse Theatre. “Oh look” you’ll say, “a proper theatre”. It is intimate, adventurous, has no Corporate Identity. It is a place of Art in the making.

Showing here until Sunday 20th May is ‘Call Paul Robeson’, a profoundly moving one-man play written and performed by Tayo Aluko. An elderly Robeson looks back at the trajectory of his life through a super-star singing career, academic and intellectual achievements and his love of women, humanity and justice. His political commitment was first stirred by talking to Welsh miners in London and led him to his understanding that the struggles of 1930s British workers were just as much a product of capitalism as the African-American slavery his own father was born into. It was his statement, “The Artist must take sides, he must elect to fight for freedom or slavery. I have made my choice. I had no alternative” made in support of the Spanish Republicans that defined his intellectual and creative life. For this commitment he was ‘called’ by the Committee on Un-American Activities; was harassed and persecuted by the US government; not welcome in his own country but forbidden to leave. 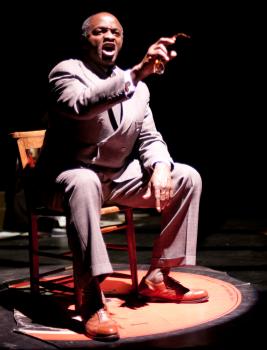 Tayo Aluko carries the spirit of his subject, showing a man of deep compassion, twinkling humour and deep thought. He deftly moves his audience through laughter and tears. Maybe my tears were mixed with tears for the resonances with the world now as much as the world then. There is a scene where Robeson sings ‘Joshua fought the battle of Jericho’ at Peakskill in 1949, his audience is protected from attackers by a ring of thousands of trade unionists. The struggle of one man’s beautiful voice against the yelling of racist anti-communists and the pounding whirr of the helicopter surveillance suddenly summoned my memories of the oppressing of the creativity of Climate Camp with helicopters: dealing with the age-old threat presented by visions of a better world. Witnessing on the stage that same old…same old story is a cathartic release, but the most important thing about seeing this play, apart from the fine singing and mesmerising story, is the strength one gains – a tonic to making art and to creating Jerusalem.

As Tayo Aluko carries Paul Robeson’s burden towards an after-life off-stage and the lights come up, you will discover that the Warehouse Theatre is the most recent victim of capitalism. The banks fail, Croydon Council pulls its purse strings tight garrotting the theatre’s grant, Art can go hang, but Luna House continues its noble work of determining worthy and unworthy citizens.