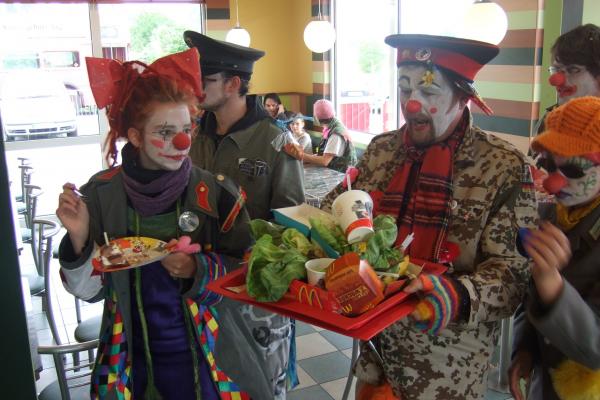 Peace News is hosting a clown army training weekend 3-4 March in London. It will culminate in waddling off to do an action. Welsh hero of the nation, Capten Cyboli will be present.

To cover venue hire and train fare for recruiting sergeants a suggested contribution is £15-£40 depending on pocket. If anyone knows a free venue the cost will be enormously less.

The Clandestine Insurgent Rebel Clown Army (CIRCA) has reclaimed the art of Rebel Clowning: its combatants don’t pretend to be clowns, they are clowns, real trained clowns. Clowns that have run away from the anaemic safety of the circus and escaped the banality of kids parties.

CIRCA aims to make clowning dangerous again, to bring it back to the street, restore its disobedience and give it back the social function it once had: its ability to disrupt, critique and heal society. Rebel Clowns are trained by CIRCA recruiting officers, using a variety of different exercises, training includes finding your inner clown, civil disobedience tactics, learning to be spontaneous and playful, practising clown gaggle manoeuvres and, last but not least, marching and drilling.

Everyone in CIRCA is asked to form or join a Clown Gaggle (a group of clowns which you can name Battalion/Contingent/Brigade/Division/Regiment or any other suitably stupid title). Gaggles can be based around your locality, a pre-existing affinity group or group of friends, or around a common interest or identity (like doing a similar style of clowning, a specific clown action or having a focus like “no borders”). A suggested size is between 5-20 clowns. These Clown Gaggles will function in a similar way to affinity group. Clown Gaggles should plan to be self-reliant including providing for their own logistics, needs and support before, during and after actions.

You cannot take part in CIRCA actions unless you have some experience of Rebel Clown Trainings.

Fishing Clowns move like a school of fish: Stand together in a clump as tight as possible while still having room to move. The person who finds themselves at the front in the direction of the clump initiates a motion/gesture/sound. The clump gradually keeps changing direction, with new people constantly finding themselves at the front on the gaggle. Pointers: Stay close, keep movements simple, use levels (high to low), the key is completely synchonized movement.