Natalia Grana writes from the occupation in the city centre. 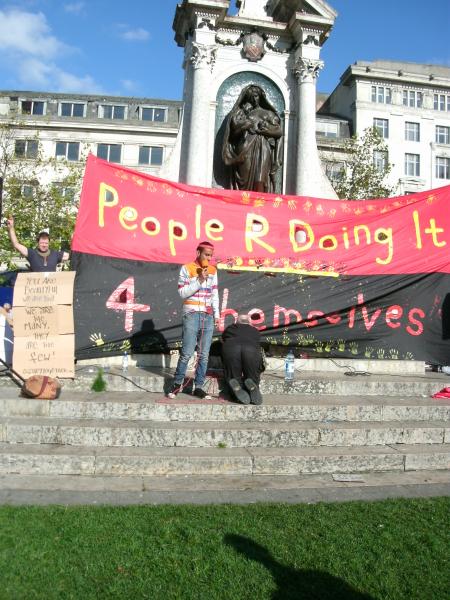 Since 2 October, a group of around 30-40 people have made an Occupy camp in Manchester city centre which is still growing. Its conception started at the same time as the TUC march against the Tory conference (which was held in Manchester from 2-5 October).

The camp began by taking over Albert Square and a few days later, when a food festival came to the square, occupiers negotiated with authorities to peacefully maintain a presence in one corner of the square with a stall and a tent. They moved the camp to the Peace Gardens in St Peter’s square just 200 yards down the road, which is right by a tram stop, so is still very visible to the general public.

The diverse group of motivated and committed occupiers may stay indefinitely. They have had good relations with Manchester police so far. The one exception was on the night of 15 October, when police did not show up despitebeing asked to be present when right-wing “English Defence League” supporters were in the city. Luckily no-one was hurt, although a board was lobbed at a tent, which stayed up.

The Occupy MCR group hold regular general assemblies open to the public in which anyone who wishes to is free to speak. Public meetings are held daily at 1pm and 8pm. Topics covered include how society is dehumanising us, how the system worldwide is corrupt and keeping down 99% of the population while 1% live it up and control the banks, corporations and are even now trying to demolish our NHS and our other public services.

Some occupiers have issues with Social Services, as there is a practice that can take children away if there is “a future risk of emotional harm”. There have been calls to “peacefully walk them out of their office”, to “stay here until the change we want happens” to “get our message out there” and “talk to and promote the needs of the masses”.

Occupy MCR were inspired by the global movement especially Occupy New York. They organised an event on 15 October in Piccadilly Gardens with a sound system and a microphone, huge banners and placards (and cardboard and pens for people to write their own), a general assembly with the notion to instigate public debate.

The day started with the general assembly at 11.30am using consensus decision-making hand gestures (explained at the beginning) and anyone who wished to could take the mic. A call to occupy banks on Market Street was immediately put into action by 40-50 people from a crowd of about 300. There was also a conga around Piccadilly Gardens, and the crowd acted as a “people’s mic” by repeating some quotations from Gandhi.

People were called upon to keep it lawful and abide by common law meaning no-one would be harmed or threatened or killed and there would be no breach of the peace. Trky (pronounced Tricky), a prominent speaker from the Occupy MCR camp told us that “Every last one of us counts and we must give up the idea of race, religion and other differences”, “We’ve got unconditional love” and “homo sapiens means survival of the many not survival of the fittest”. Mani called for international social justice, for corporations to pay their taxes and for us to share the world’s resources.

There was a peaceful, positive atmosphere – no arrests, or violence. Barclays, Santander and Vodafone closed their doors for the afternoon, and many, many more people were made aware of the global movement for change, anarchist ways of discussing topics. They were also inspired to find out more about what’s going on globally and what they can get involved with.

Natalia Grana is a member of the Quaker Peace group, Greater Manchester, Campaign Against Arms Trade , and Manchester against Militarism