The March that Shook Blair: An Oral History of 15 February 2003 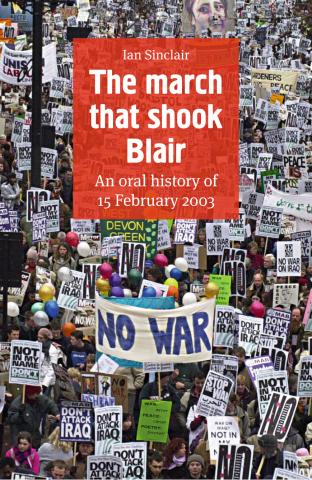 To mark the 10th anniversary of Britain's biggest ever protest, in 2013 Peace News Press published Ian Sinclair's The March that Shook Blair: An Oral History of 15 February 2003.

Praise for The March that Shook Blair:

“This is a fascinating book – a moving and nostalgic piece of oral history. An honest warts-and-all account.”
Bruce Kent, Vice President of CND

“On this evidence, the big march was shock and awe from the bottom-up; it came within a hair's breadth of derailing the warmongers and still shapes our politics today.”
Joe Glenton, Afghan war veteran and author of Soldier Box (Verso)

“While our rulers have every interest in erasing any trace of the anti-Iraq War movement from history, it is important we do not make the same mistake. In telling the story of the march and its far-reaching influence – including the important role played by British Muslims - 'The March that Shook Blair' is an inspiring and timely reminder of the power of public protest”
Salma Yaqoob, former leader of Respect

“A treasure-trove meditation on the logic and power of protest focusing on one of the most important moments in modern British political history. Full of insight, interest, wit and humanity, it rescues February 15, 2003 from the Orwellian memory hole and the media lie that ordinary people are powerless to change the world. A reminder of the elevated stakes in an age of Permanent War, the message of this book: all is not as it is made to seem.”
David Cromwell and David Edwards, Co-Editors, Media Lens

"Unrivalled in the immediacy, range and power of the experiences it contains, this important oral history book includes a diverse range of voices which reveal the complex story of this historic march. A compelling read."
Lyn Smith, author of 'Voices Against War: A Century of Protest' (Mainstream Publishing)