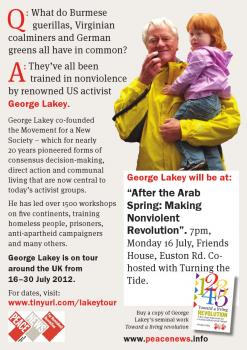 Co-founder of the Movement for a New Society - which for nearly 20 years pioneered forms of consensus decision-making, direct action and communal living that are now central to today’s activist groups - George Lakey has led over 1500 workshops on five continents, training coal miners, homeless people, prisoners, Burmese guerillas, steel workers and others.

This Summer, George is touring the UK on a rare visit organised by Peace News.

Events are free and open to all unless indicated otherwise.

Confirmed dates so far include:

Brighton, 17 July: "Pacifism as Pathology? A Response to Ward Churchill". 7pm, Cowley Club, London Road. PLEASE NOTE THAT THIS MEETING WILL BE STARTING AT 7PM NOT 7.30PM AS PREVIOUSLY ADVERTISED.

To be kept informed about the George Lakey tour, please email admin@peacenews.info

George Lakey was first arrested for a civil rights sit-in in the 1960s; he was most recently arrested on a climate change action in 2010. Over the last 50 years, he has worked with trade unions and poor people’s groups as well as peace activists and environmentalists. A gay, working-class white North American, George has led 1,500 social change workshops on five continents. He was an unarmed bodyguard for human rights activists threatened with assassination in Sri Lanka, and was smuggled across the border to work with pro-democracy insurgents in the Burmese jungle. In 1971, George was a co-founder of the US ‘Movement for a New Society’, which over 18 years, developed many of the facilitation and consensus decision-making tools that have become standard in Western activist circles.

George has written seven books, which have been translated into at least six languages. Among other works, he co-authored A Manual for Direct Action, which was widely used in the South in the 1960s. Most recently, George wrote Facilitating Group Learning: Strategies for Success with Diverse Adult Learners (Wiley, 2010). Peace News, the organisers of the training weekend, are this year re-publishing (with a new foreword) a 1987 book: Toward a Living Revolution.

Leading US activist and trainer Starhawk says of Facilitating Group Learning: ‘I’ve been working with forms of direct education for many decades, and I found new ideas and inspirations in every chapter. For anyone involved in teaching, training, sharing skills, or leading groups, this book is an invaluable resource!’

Denis Lemelin, national president of the Canadian Union of Postal Workers: ‘George Lakey has inspired our union to engage in education in a way that challenges us to redefine social justice and equality in new and exciting ways. This book [Facilitating Group Learning] helps us to continue our journey to touch the souls of union members.’

Part 3: Activism and the limits of consensus

On training in Cambodia in the 1990s: