Being Chilean, I was prevented from visiting Cuba between 1973 and 1990: had I travelled there I would not have been allowed to re-enter Chile, as I would have been labelled a Marxist. At the very least it would have caused me more troubles than the ones I was already experiencing with the dictatorship for being part of the human rights movement: in 1982, I was sacked from my academic work at a Chilean university for political reasons.

Getting a visa to enter Cuba was not possible anyway, as being Chilean I would be considered a fascist. In 1987, I tried to visit Hungary, crossing the border from Austria, and I was not allowed in because I came from a “fascist” country. So, I had to wait for over a decade to visit the people and sun of Cuba.

But the day finally came and on 28 March this year. At nearly midnight, my grand-daughter Eva and I arrived at La Havana airport. Our first impressions on leaving the airport were of the great warm atmosphere, how few cars there were on the main road into town and the fact that there were no adverts. We both kept a little diary and I include excerpts from three of our days.

We got off a guagua, a local bus, and walked towards Avenida de la Independencia to Plaza de la Revoluci&oacute;n. The air was lovely and warm, at least 30&deg;C. To our great surprise our walk started on Avenida Salvador Allende, a big avenue dedicated to the memory of the Chilean president whose democratically elected government was overthrown by General Pinochets fateful military coup in 1973.

The day before, walking along Avenida de los Presidentes, we had seen a statue in Allendes memory, along with other heroes of Latin American independence struggles. An old lady, whose job it was to take care of the statue, showed us the Hotel Los Presidentes, which had been used for about three years by Chileans who had fled to Cuba in exile or who had been expelled from Chilean jails after suffering torture. This arrangement had been made by the Cuban government, and the hotel became a temporary refuge. It was like walking along the streets of our own country.

On our first night, watching one of the two TV channels, we listened to the popular Cuban singer, Pablo Milanes, singing a famous song called Yolanda. Today I stopped at a street sign bearing Allendes name and sang a la-la-la of the melody of Yo pisare; las calles nuevamente de lo que fue Santiago ensangrentada - “I'll step again on the streets of what was once the bloodied streets of Santiago [Chiles capital]”. Milan&eacute;s composed this song in homage to Miguel Enriquez, one of the young Chilean leaders who had resisted the dictatorship and was assassinated aged 28. Eva looked at me in surprise, I rarely sing, but then I told her the story - and subsequently had to answer many more questions!

While sitting in my office at WRI in London some months ago, I received an email containing the words of the speech given at the inauguration of John Lennons sculpture in La Havana. As Evas mum is a Beatles fan we decided to go in search of it.

So, on Saturday we took a guagua and got off at &quot;23 and 6&quot;. We were walking and talking while enjoying the sun and the air as we arrived at a little plaza. The grandiose statues of the heroes of Avenida de los Presidentes prompted us to look for a similar statue. We walked around the whole park, saw no Lennon statue but did see lots of kids playing (it was lunch break and there was a school nearby). I approached one of them and asked if they knew about the Lennon statue. They looked at us and pointed at one of the parks benches. There he was, sitting at ease, looking at the kids playing and the passers-by; enjoying the shade from the trees and the trill of the birds.

I saw this as a reflection of the attitude the Cuban people have towards TV presenters, musicians, doctors and the like. They are ordinary people, not celebrities and live day-to-day just like any other citizen. We were also living this on a personal level, as we were staying next door to one of the TV presenters and we used to take the same guagua, sit for a chat in front of the house and we even prepared and ate meals together.

We sat next to John and asked a passerby to take a picture of us and then I took the one above of Eva with him. At that stage, there was another surprise. Next to his feet, written, as if by hand, was &quot;Imagine&quot; and the first verse of the famous song in Spanish. 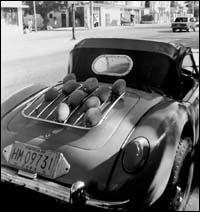 Quite early in the morning Eva and I would often head to the local market, called AGRO, where peasants and small-scale rural growers sell their products to local people for Cuban pesos. We would buy pineapples, lettuces, tomatoes, oranges and bananas. The stalls show everything they have: beautiful, colourful and great-smelling products. There are no large quantities. The growers bring what they can to sell, there is no sense in having to display loads and loads to try to tempt people. Some people come to buy, and others to sell.

Today, at the entrance, after exchanging US$3 at an official stall, we caught sight of a very striking car, an old sports model, and on its luggage rack we saw a type of fruit we did not recognise. I asked someone what they were and was told they were called &quot;mameis&quot;. I could not hide my surprise. Again a song came to me, with emotional strength and intense memories. Chiles famous musician V&iacute;ctor Jara, who was detained, tortured and killed by Pinochet's men, used to sing >Duerme Negrito &quot;Sleep my little baby black boy. &quot; The song referred to a peasant mother singing to her child that he should sleep, that his mother was working in the fields and that, as a present, she would bring him mamei (a very precious fruit from Cuba) and a piece of pork.

The song was powerful in itself and I had never wondered about the fruit. But here it was, on the back of the car, clear and present and ready to be bought and brought home for children. I bought one for Eva, and we ate it at home while we listened to the song - which we had brought with us on a cassette. Now mamei was a real thing, not just a romantic idea from a song. Ernesto Grenet, a Cuban folk composer, wrote the song in memory of the life that black slaves had lived while working for rich Cuban land owners.

The land in Cuba does not belong to individuals now, it belongs to the state. And the song is still powerful and is sung frequently in Latin American countries.