When can unpopular protest be effective? 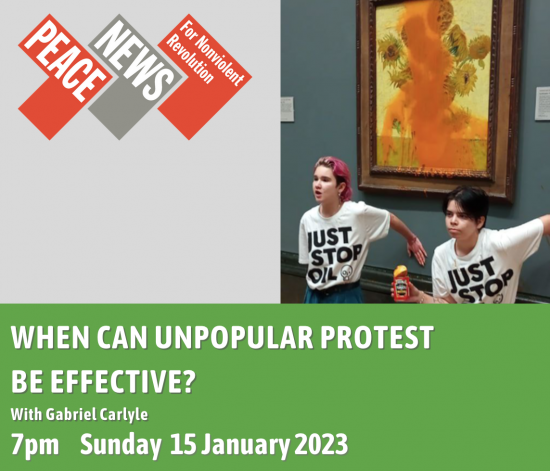 Recent actions involving famous artworks have led to a debate about if and when such protests are effective. On the one hand, activism is not a popularity contest. For example, though Dr Martin Luther King Jr is now widely regarded as a secular saint, towards the end of his life some 63 percent of the US population had an unfavourable opinion of him. On the other hand, it's better if an action makes sense to other people as well as to you – and if it is part of a coherent strategy for change.

Join Gabriel Carlyle on Zoom on Sunday 15 January to explore this and other issues raised in his recent article 'Activism is not an unpopularity contest'.

As well as being the PN reviews editor, Gabriel Carlyle is the co-ordinator of Divest East Sussex which persuaded Hastings borough council to divest from fossil fuels in 2016, and which has been campaigning since then for the East Sussex county council pension fund to stop investing in fossil fuels.