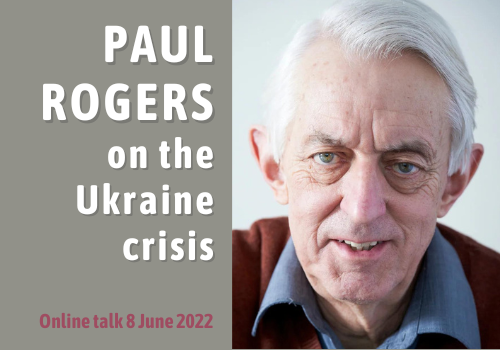 Paul Rogers gives an update on the Ukraine crisis, in the context of the legacy of the Cold War's proliferation of weapons of mass destruction; the impact of human activity on the global ecosystem; the growth of hypercapitalism and resulting poverty and insecurity; the competition for energy resources and strategic minerals; biological warfare programmes; and paramilitary actions against centres of power.

Paul calls for a radical re-thinking of western perceptions of security that embraces a willingness to address the core issues of global insecurity.

This is PN's second Zoom event with Professor Rogers about the Ukraine crisis. You can view the first event (which took place on 9 March 2022) here.

Paul Rogers is emeritus professor of Peace Studies in the Department of Peace Studies and International Relations at Bradford University, northern England and an honorary fellow at the Joint Service Command and Staff College. His latest book is the fourth edition of 'Losing Control: Global Security in the 21st Century' (London: Pluto Press, 2021).