Zoom talk with Milan Rai: How the West Paved the Way for Putin's Nuclear Threats Over Ukraine 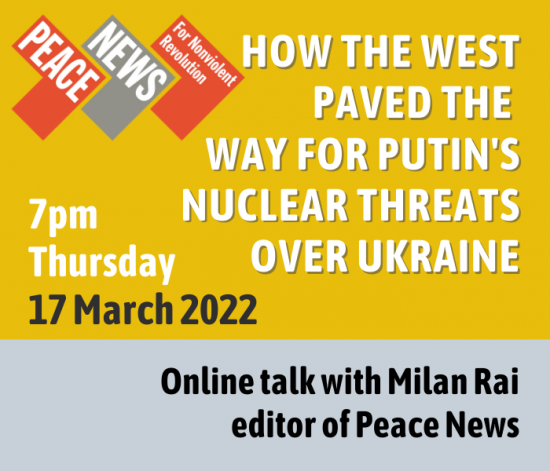 Milan Rai sets out Putin's nuclear threats today and compares them to examples of Western nuclear bullying in the past.

Russia's nuclear threats during its latest invasion of Ukraine have been disturbing, frightening and criminal. They amount to nuclear terrorism. Unfortunately, they are not the first such threats that the world has seen. Nuclear threats have been made before, including by the US and by Britain.

Milan Rai is the author of several books including 'Tactical Trident: The Rifkind Doctrine and the Third World' (1995) and 'Chomsky's Politics' (1995). His most recent publication is a chapter: 'Thinking the Unthinkable about the Unthinkable - The Use of Nuclear Weapons and the Propaganda Model' (2018) His article, 'How the West Paved the Way for Putin's Nuclear Threats Over Ukraine' is online at:
www.tinyurl.com/westernnuclearthreats

This talk is organised and hosted by Peace News.