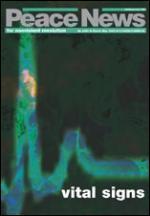 Editorial: No note of apology

Recently, Turkey witnessed an unusually spirited long weekend. There was action almost everywhere in the country starting on Friday 24 January.

Learning the ropes of peace activism

By A H Cemendtaur

Friends of South Asia is a relatively new peace group working with the South Asian diaspora in the US. Here AH Cemendtaur reflects on their experiences over the past 15 months.

Nonviolent resistance to war in America

Can people in the US build an effective nonviolent resistance movement? Or is a lifetime of consumerism and militarism obstructing the path once walked by Martin Luther King? Gordon Clark reflects.

The Nonviolent Movement (Movimento Nonviolento or NM), founded in the sixties by Aldo Capitini, “father” of Italian nonviolence, works to remove individual and group violence from every aspect of social life at a local, national and inter

Michael Shank reports on a youth peace conference organised by Youth Initiative for Peace in Lahore, and a moving visit to the India-Pakistan border.

Resist: resisting the war on Iraq!

When the law turns into injustice, resistance becomes a duty. So say German activists from the resist campaign. Elke Steven reports on a European pledge initiative that is gaining strength.

International support is crucial in alleviating violence and conflict within Palestine and Israel. Franco Perna experiences the situation firsthand as a volunteer olive-picker.

This has turned into a bit of a funny issue really, but the original idea was to try to generate a snapshot of the “health” of the international peace movement in the “post 11 September 2001 security environment”.

On 28 July 2002, the Russian President signed into law the federal bill "On Alternative Service" (ACS), adopted by the Russian Federation Federal Assembly shortly before. In November 2002, War Resisters' International's Daniel Garay was in Russia to attend the in augural meeting of the antimilitarist Organisation Without Weapons, set up to rally against military conscription.

Towards a peaceful world: a student's perspective

Writing from India, Subhadip Mukherjee argues that the "war on terrorism" is bringing inhuman suffering and misery to an already impoverished population, and that economic depravation and the threat of monoculture are driving forces behind certain acts of terrorism.

Molly Morgan reports on a project to counter military propaganda in US schools.

Broadening the concept of resistance in Israel

Israeli women who object to military service find themselves marginalised by both "normal" society and within the resistance movement. Ruth Hiller and Sergeiy Sandler report on a New Profile initiative to challenge the influence of dominant gender constructs within the activist community.

Editorial: No note of apology

Gore Vidal, 'Perpetual War for Perpetual Peace: How we got to be so hated - causes of conflict in the last empire'
William Kunstler, 'Politics on trial'
Steven Schofield, 'Peace and Prosperity: Transition from Permanent Military Economy to Advanced Civil Economy'
Jillian Edelstein, 'Truth and Lies - Stories from the Turth and Reconciliation Commision in South Africa'
Milan Rai with a chapter by Noam Chomsky, 'War Plan Iraq: 10 Reasons Why We Shouldn't Launch Another War Against Iraq'
Susan Hawthorne and Bronwyn Winter (eds), 'September 11, 2001: Feminist perspectives'
Grant Wakefield/Various, 'The Fire This Time: Deconstructing the Gulf War - a permanent record of the fate of Iraq and a guide to the language of mass-media propaganda'
Trudy Govier, 'Forgiveness and Revenge'
Pilar Aguilera and Ricardo Fredes (eds), 'Chile: the Other September 11'
The Good Shopping Guide