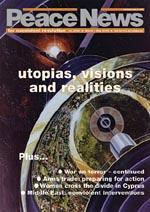 Editorial: Whose utopia is it anyway?

The second World Social Forum (WSF), attended by an estimated 50,000 people representing hundreds of organisations from all over the world, took place from 31 January to 5 February in Porto Alegre, Brazil.

On 3 February, dozens of foreign civilians marched in Ramallah to deliver a message to the Israeli occupation forces.

Israeli COs: refusing to kill

Between December 2001 and PN going to press, at least 11 Israeli and Druse men spent time in military prisons for refusing to serve in the Israeli Defence Force.

Mugabe on the offensive

Both independent and foreign journalists, and the lesbian and gay community, have again been under attack in Zimbabwe during January and February.

Rules: made to be broken

While international attention is focused on prisoners transferred by US from Afghanistan to Camp X-Ray, elsewhere in the world the US government is using peace-keeping forces to arrest, unlawfully detain, and in some cases effectively kid

The path to democracy?

We rejoice in the good news that, since the ousting of the Taliban, Afghan women are no longer forced by law to wear burqas to cover themselves from head to toe in public. So why is it that the majority of them are choosing to retain the veil, in real fear for their lives? Lindsay Barnes investigates.

Enough is enough! Demonstrating for peace in Cyprus

Cynthia Cockburn has been spending time in Cyprus working with a women's bi-communal project.

Arms fairs: a great time to show opposition to the death trade

The arms trade is hardly a new issue and its end is a long way from being seen by groups working against the death trade. But, as French activist Tikiri reminds us, That wont stop us from taking action against it!

Frustrated at the lack of intervention by the international community, a group of international activists joined with local people in the Occupied Territories in December to take direct action. Angie Zelter reports.

Utopia - no place, a never-never land beyond the realm of everyday experience, a dream world that is unattainable, a fantasy vision to which people might like to fly in their dreams and escape the chains of reality.

Ecotopia: a future with a long past

Ecotopias may appear as relatively modern visions, but their origins lie in the ideas and thinking of historic movements. David Pepper examines the journey to modern ecotopias.

In this interview Lauren Kelley talks with one of the Atlantis community's founders, Jenny James about the aims of the community and how the murder in July 2000 of two young community members at the hands of Colombian paramilitaries has impacted their ideals.

In this interview, which was published in Gandhi's weekly paper Harijan on 28 July 1946, Gandhi spells out his vision of the ideal community and its relationship to the individual

Will education be the tool that helps us develop utopias, or will it remain our prison? Caroline Austin talked with "educational heretic" Roland Meighan.

Martin Buber's Paths in Utopia. The Kibbutz: an experiment that didn't fail?

The first Jewish co-operative agricultural settlement was established in Palestine in 1909. The founders of what was to become the kibbutz movement believed they were laying the basis for a new society for the Jews, one based on cooperation, equality and communal living. One of the ideologues of the movement was the philosopher Martin Buber. In his book Paths in Utopia, which remains one of the most powerful critiques of authoritarian socialism, he claimed that this movement was one example of a non-authoritarian, libertarian or "utopian" socialism that had not failed. Uri Davis challenges this understanding of the kibbutz movement and draws parallels with the failure of Buber himself to live by the ethic he endorsed.

Editorial: Whose utopia is it anyway?