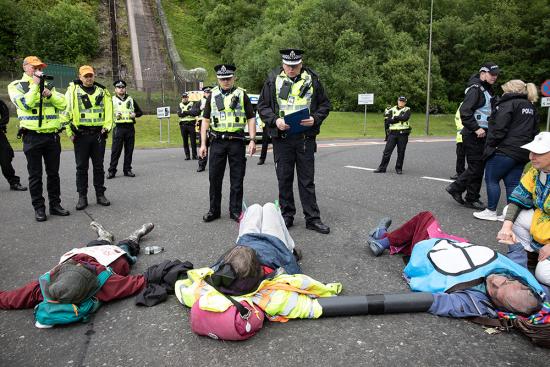 The Faslane Action for Bomb Ban Camp has led to at least four arrests outside RNAD Coulport, the nuclear warhead storage facility in west Scotland

At least four people have been arrested among the many actions this week at the FABB (Faslane Action for Bomb Ban) Camp in Peaton Wood, in western Scotland.

According to the FABB organisers, one of the arrestees was deprived of her heart medication for nine hours by police and threatened with being held overnight without access to her medication.

The FABB Camp is very close to RNAD Coulport in western Scotland, which holds the nuclear warheads for Britain’s Trident missiles. Those missiles are carried by Trident submarines based at Faslane submarine base in the neighbouring loch.

On a lighter note, among other actions at the camp, four activists managed to canoe into Coulport’s waters, and one woman landed on Coulport’s ‘beach’ and planted a CND flag on MoD land!

The FABB Camp, running from 9 – 18 June, has been set up to publicise the UN Treaty on the Prohibition of Nuclear Weapons and ‘to record opposition to UK threats of nuclear mass destruction’.

Trident Ploughshares and XR Peace are the main organisers of the camp, supported by Greenham Women Are Everywhere and other groups.

On Monday 13 June, five women from Greenham Women Are Everywhere poured fake blood on themselves and carried out a die-in, blocking part of the main gate of RNAD Coulport.

Then three members of the ‘Peaton Peace Pirates’ Trident Ploughshares affinity group locked-on, blocking the road at the nearby roundabout.

The five women were not arrested, but the three Peace Pirates were cut out and arrested. One of the Peace Pirates was Brian Quail (84), who the FABB organisers described as ‘with a heart transplant and disabled by a recent stroke’. Brian said: ‘Trident is illegal and immoral and the worst thing in the world’.

Another of the Peace Pirates was Gillean Lawrence, an XR Peace supporter, who said: ‘It is a humanitarian catastrophe with billions of pounds spent on preparing for a nuclear holocaust that does not make us safer. In fact the opposite. It could be spent on dealing with the climate emergency.’

Like the others, Gillean was arrested and taken to Clydebank police station. She has made a formal complaint about her treatment by the police at Clydebank. According to the FABB organisers, the police refused to allow her to take her heart medication. After nine hours in the cells, Gillean was forced under duress to sign an ‘undertaking’ (accepting certain bail conditions) so that she could be released. The police are said to have threatened to hold Gillean overnight until court the next day, without access to her medication, creating a fear that she might have a stroke.

It was on Tuesday 14 June that Ginnie Herbert managed to plant a flag on the ‘beach’ at Coulport, and then canoe away back to camp with her three fellow activist canoers.

On Wednesday 15 June, there was another die-in at Coulport main gate, with three women pouring fake blood on themselves again. One of the women taking part was Gillean Lawrence, who left the road when warned that arrest was imminent, because of her mistreatment by the police on 13 June.

Another participant in the die-in, Ros McEwan, was arrested. In her written statement to the police, Ros wrote: ‘I am a practicing Buddhist and have to do my bit to raise awareness and take a stand against these illegal weapons of mass destruction.... [N]uclear weapons do not stop wars – which only destroy lives and the economy but have a huge carbon bootprint.... [N]uclear weapons are not a deterrent, they are a provocation.... [W]e need to disarm and invest in environmentally sustainable industries and programmes which will enhance the wellbeing of all of the planet.’

There have been many other events during the FABB Camp, including daily vigils at Coulport and Faslane, and songs from the Edinburgh-based radical singing group, Protest in Harmony.

More info on the FABB Camp on the Trident Ploughshares website.