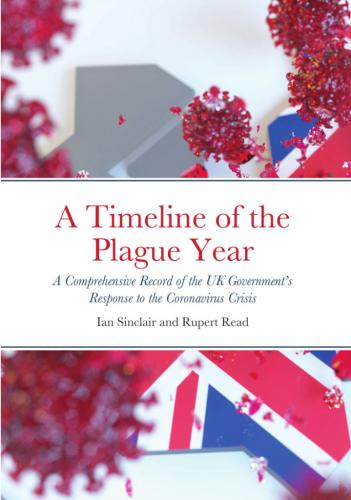 Ian Sinclair, Rupert Read and Joanna Booth explain how they ended up publishing the most comprehensive record of the UK government’s response to the pandemic to date

After creating and then updating a timeline of the pandemic every week since April 2020, in April 2021 Ian Sinclair and Rupert Read, working with editor Joanna Booth, published a free eBook A Timeline Of The Plague Year: A Comprehensive Record of the Government’s Response to the Coronavirus Crisis.

The impetus for the timeline came from a sense Rupert had, in February-March 2020, of the then emerging coronavirus pandemic in the UK as being, in the words of Richard Horton, Editor-in-Chief of The Lancet medical journal, a ‘national scandal’. This was especially true when compared to the appropriately rapid and precautious response to Covid-19 that occurred in many other island states, such as Taiwan and New Zealand.

Ian had known Rupert since they were contributors to a progressive weekly column in the Eastern Daily Press regional newspaper in the mid-2000s. After being invited by Rupert on 1 April 2020 to join him in compiling a timeline of the crisis, Ian led on developing the content of the timeline, and Rupert added to it and arranged for its publication in Byline Times.

The timeline was also borne out of a realisation and frustration the media were failing to hold the government to account, and failing to educate the public about the dangers the virus presented to the nation.

Like many people, in the first weeks of the crisis, journalists seemed stunned by the sheer speed of events and the paradigm shift politics and society were undergoing. Arguably too, as with previous national crises, much of the media were very sympathetic to the government’s position in the early part of the pandemic.

To highlight just one egregious example from the liberal, critical end of the mainstream press, on 14 March 2020, the Guardian published a full page article titled ‘Which activities are safe and which should people avoid?’ written by science correspondent Hannah Devlin. Paul Hunter, Professor in Medicine at the University of East Anglia, is quoted extensively in the piece, saying he would not stop visiting his elderly relatives, that it was OK to visit the pub, and that from the perspective of individual risk there was not a strong argument for avoiding big sporting events.

Just over a week after this reckless journalism was published, the Prime Minister announced an unprecedented national lockdown. Of course, there have been many important and critical news reports – much of our timeline is made up of them, after all – but to quote Edward Herman and Noam Chomsky, ‘That a careful reader looking for a fact can sometimes find it with diligence and a sceptical eye tells us nothing about whether that fact received the attention and context it deserved, whether it was intelligible to the reader or effectively distorted or suppressed.’

After the Byline Times piece received a lot of positive attention on Twitter and elsewhere, Ian and Rupert agreed to continue to update the timeline. And with the media performance improving in March 2020, the aim shifted a little – from highlighting critical information being ignored by the media to compiling the most comprehensive record of the government’s response to the pandemic. The plan was to create a detailed account of the pandemic, which would be useful to anyone interested in following the key events of the crisis as it progressed, and also to historians studying the pandemic in the future.

It was agreed the timeline would, as much as possible, be based on mainstream sources – the press, television and radio news, medical journals, health experts and organisations, trade unions, polling organisations, etc. – and presented in a broadly neutral manner to allow the reader to make up their mind about events. Nicholson Baker’s 2008 book Human Smoke: The Beginnings of World War II, the End of Civilization was a key influence on Ian when it came to considering the format and tone of the timeline.

Accordingly, the timeline was updated every week between April 2020 and 30 March 2021 and, for simplicity and speed, published on Ian’s Medium blog. Others have compiled timelines at various stages of the crisis – the anti-Brexit campaign group Led By Donkeys created an impressive timeline, audaciously projecting it onto Barnard Castle – but true to our aim we are confident our timeline is by some distance the most comprehensive record of the government’s response to the pandemic in the UK.

Joanna contacted Ian and Rupert in late 2020 suggesting the timeline be made into an eBook. Documenting the events in a book was important not only as evidence but for posterity, Joanna believed. This was public knowledge that needed to be kept safe.

Working at speed – with Joanna completing the difficult editing work, Rupert and Ian getting endorsement quotes from Michael Rosen, Peter Tatchell, John Ashton, Nafeez Ahmed and Molly Scott Cato, and the title borrowed from Daniel Defoe – we were able to publish the book on 15 April 2021.

With over 150,000 now dead from covid and the UK government refusing to establish an independent public inquiry into its response to the pandemic, we believe Horton’s April 2020 charge against the government to be more pertinent than ever: ‘They really are scared that the verdict of history is going to condemn them for contributing to the deaths of tens of thousands of British citizens. They are desperately trying to rewrite the timeline of what happened. And we must not let them do that.’

This article is an adapted version of the introduction to A Timeline Of The Plague Year: A Comprehensive Record of the UK Government’s Response to the Coronavirus Crisis by Ian Sinclair and Rupert Read.

A Timeline Of The Plague Year is available as a free PDF download, free eBook and pay-to-print book from https://covidtheplagueyear.wordpress.com