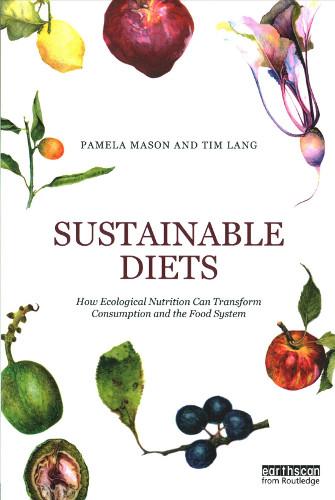 What is a sustainable diet? Is a vegan diet necessarily sustainable? And what's blocking moves to a more sustainable food system? Ian Sinclair investigates.

After reviewing the book for Peace News, Ian Sinclair asked the two researchers what they mean by sustainable diets, what role veganism can play, and what concerned people can do to quicken the transformation to a sustainable food system.

Ian Sinclair: What is your definition of a sustainable diet?

Pamela Mason and Tim Lang: A sustainable diet has often focused on a diet that is protective for the planet, particularly for reducing greenhouse gas emissions (GHGEs). Given that food systems account for 25-30% of GHGEs, this is an essential consideration for sustainable diets, but we believe that a sustainable diet should be defined more broadly to include public health, cultural acceptability, accessibility, safe and affordable food, and the health and welfare of all who work in the food system. We are in agreement with the definition of the FAO and Bioversity (2010) which defined sustainable diets more broadly than nutrition + environment (or calories + carbon), as “Sustainable Diets are those diets with low environmental impacts which contribute to food and nutrition security and to healthy life for present and future generations. Sustainable diets are protective and respectful of biodiversity and ecosystems, culturally acceptable, accessible, economically fair and affordable; nutritionally adequate, safe and healthy; while optimizing natural and human resources”.

IS: You note that standard Western diets are far from sustainable – causing obesity and non-communicable diseases, with the rich world “eating as though there are multiple planets”. How do our diets in the West need to change for them to become sustainable?

PM and TL: The main change required to make Western diets sustainable (and increasingly the diets of well-off people across the world) is to reduce meat intake. Livestock production is responsible for a third of all agriculture’s GHGEs and 70% of agricultural land use globally. Nearly half of global agricultural land is used for livestock feed production. Some 36% of the calories produced by the world’s crops are used for animal feed. Only 12% of those feed calories ultimately contribute to the human diet as meat and other animal products so animals are relatively inefficient in terms of feeding people. In practical terms, a sustainable diet is therefore one based on plant foods (i.e., vegetables, fruits, wholegrains, beans and pulses and nuts) with animal foods (meat and dairy), if liked, consumed in small to moderate amounts. Although meat is a source of nutrients (e.g. iron, zinc, vitamin B12 and protein) in the human diet, these nutrients, with the possible exception of vitamin B12, can be obtained from plant foods. Meat is therefore not an essential component of the human diet. Fish is more difficult. Several authorities around the world, including the UK, specifically recommend the consumption of oily fish for reduction of cardiovascular risk due to its omega-3 fatty acid content, which is problematic when 80-85% of global fish stocks are fragile. Moreover, fish is an important source of income and indeed of protein in some small communities throughout the world. Of note is that some specific communities such as Seventh Day Adventists and also people who choose to follow a vegan diet and consume no fish enjoy good cardiovascular health.

IS: Many people see a vegan diet as the best diet in terms of climate change, the environment, human health and animal welfare/rights. However, in the book you note a vegan diet may not be sustainable. Why?

PM and TL: Compared with a traditional Western meat containing diet, a vegan diet containing no animal food is associated with reduced GHGEs, reduced land use and reduced water use. However, a vegan diet that simply contains no animal food is not necessarily healthy in that a vegan diet could focus on foods such as white bread, jam and chips.  It is important to distinguish between a healthy vegan diet or a healthy plant-based diet as being one which focuses on whole unprocessed foods, including vegetables, fruit, grains and pulses.

In terms of environmental and socio-economic impact, vegan diets are not necessarily 100% good news. This is a highly complex picture. Processed vegan foods may, for example, contain palm oil, which is associated with deforestation. It is not clear the extent to which ‘certified’ palm oil reduces deforestation. However, use of olive oil and sunflower oil require much more land to produce than palm oil. Workers producing coconut oil are often paid abysmally. Replacing meat with processed soya foods such as tofu and also Quorn would, with current practices, require large amounts of land to be used overseas. Some plant-based milks like almond milk require large amounts of water in their production and are to some extent nutritionally inferior to dairy milk. A vegan diet could potentially be all fruit, likely containing lots of tropical fruit, some of which again requires a lot of water in its production. People growing avocados in Mexico cannot afford to eat them any more as they are grown on a mass scale for Western consumers, with a similar situation existing for growers of quinoa in Bolivia and Peru.

A healthy sustainable vegan diet will likely depend on increasing the use of British grown field crops, such as root vegetables and brassicas as well as orchard fruits. Some pulses, beans and seeds (quinoa, lentils, peas, fava beans, haricot beans, flax) are increasingly grown in the UK and their use would reduce the use of water in water thirsty regions of the world. Soya beans can be grown in the UK too.

IS: A shift to sustainable diets seems to be a win-win – better for people’s health and for the environment. However, we are still very far from achieving this. Who or what is impeding the move to a sustainable food system?

PM and TL: Policy makers are not significantly engaging with the need for diets to become more sustainable. Partly this is due to a fear of consumers and the mantra of consumer choice. To recommend dietary change is not something that policy makers (with some exceptions) want to do. Consumers are increasingly interested in their diets, often from a health perspective, but also in terms of animal welfare, sustainable fish and to some extent from an environmental perspective. However, dietary advice is often confusing and consumers may not be clear on how they could best be eating for their own health and that of the planet. Marketing of less healthy foods high in fat and sugar and salt at the expense of healthier foods adds to consumer confusion. The food industry may resist change as it may compromise their bottom line, although some companies acknowledge the need for change because of growing consumer interest and concern that unless they make production changes ingredient availability may become fragile due to climate change, lack of water and so on.

Some countries, notably Sweden, Germany, the Netherlands, Qatar and Brazil have produced Sustainable Dietary Guidelines, whilst others such as Australia and the United States have been thwarted in their attempts largely by private sector interests. The UK’s dietary guidance is in the form of the Eatwell Guide, which was revised in 2016 with some mention of sustainability issues such as reducing red meat consumption, but it does not go far enough.

IS: What do you think are the most important actions concerned citizens can take to help quicken the transition to sustainable diets?

PM and TL: Actions that concerned citizens can take include making a dietary shift to a more plant based diet. This can be done gradually by, for example, reducing the amount of meat and increasing vegetables in composite recipes and aiming for one or more meat-free days or meals in the week. The advantages lie in terms of health and the environment and if the food is cooked from scratch in the home meals containing less meat can be cheaper. People need to gain confidence in changing methods of food preparation and food shopping. Our ‘meat and two veg’ meal culture needs to change to a ‘vegetable and grain with meat as a condiment’ approach and this can take time. Most dietitians, for example, acknowledge that dietary change is difficult, but if the whole household can get involved this helps enormously. It is also important to learn more about food, how it can be cooked and combined. Shop in places where there is a high proportion of fresh unprocessed foods and ask food retailers and producers how they produce their food (e.g. animal welfare, use of pesticides and so on). Eating together with family, friends, neighbours and community is also important as this usually contributes to enjoyment of food, learning more about it and sharing of ideas for action. Of note here are the Brazilian Sustainable Dietary Guidelines, which focus on food culture, highlighting where and how to shop for food and so on.

Concerned citizens can also form groups or join groups that are interested in issues related to food and consider lobbying town, city and county councils about issues such as land use, spaces for community vegetable growing projects and so on. Such food activist groups can also draw up strategies to help towns and cities move towards more sustainable diets and help everyone whatever their income to have access to a healthy sustainable diet. Organising food events can also highlight sustainability issues in an area, highlight local supply chains and availability of vegetables and fruits (or lack of them) and can help to develop skills in food knowledge and food preparation.