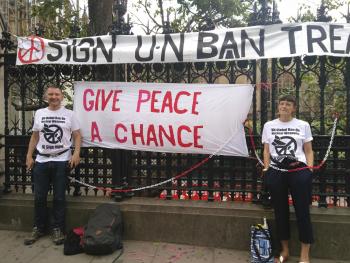 At 1.30pm on 20 June, while Britain's Westminster parliament was sitting inside, 60 activists from across the UK chained themselves to the railings outside the houses of parliament in central London. They are calling for the UK to sign the Treaty on the Prohibition of Nuclear Weapons (TPNW) and disarm the Trident nuclear weapon system.

The activists from the campaign group Trident Ploughshares chained themselves along 13 sections of wrought iron fence stretching from Big Ben to Parliament Square and hung banners that proclaim 'Denuclearize the World – Sign the Treaty' and 'Trident Terrorises'.

Nearly 50 years ago, the UK and other nuclear weapons states promised to negotiate to disarm their nuclear weapons. Their failure to keep that promise and their continued preparations to use these horrific weapons has led countries like North Korea to seek to acquire them.

Now, when most countries have agreed a UN treaty to abolish nuclear weapons, the UK and other nuclear weapons states are actively undermining that process. Trident Ploughshares has campaigned since 1998 through nonviolent direct action for UK nuclear disarmament and is a partner of the Nobel Peace Prize-winning International Campaign to Abolish Nuclear Weapons (ICAN).

Trident Ploughshares activists chained to the fence outside the house of commons.

Brian Larkin from Howgate in Scotland said: 'The Trump – Kim summit should have been a wake-up call. Media reports have focussed on North Korea giving up its nuclear weapons. But nine countries still have over 14,000 nuclear weapons. Trump and Kim have agreed to "denuclearize" the Korean Peninsula. But Britain, the US, and the other nuclear powers can’t expect Kim to give up his nuclear weapons while we keep ours. So let's sign the Ban Treaty, denuclearize Britain and the whole world.'

Sylvia Boyes from Keighley, Yorkshire said: 'We've come from all parts of the UK to call on the government to live up to its claims that it supports multilateral nuclear disarmament and sign the Nuclear Weapons Ban Treaty. For 20 years, we have been saying that nuclear weapons are illegal because of the catastrophic humanitarian consequences that their use would mean. It’s just ridiculous that Britain won’t sign this treaty. It's sheer hypocrisy.'

Jane Tallents from Howgate in Scotland said: 'Last week marked the centenary of women being given the vote. Women campaigned for the vote in many ways. Once two suffragettes chained themselves to a metal grille that confined women to a separate seating area - they were excluded from the men only public gallery of the house of commons. Like them we’ve tried everything to persuade the government to disarm Trident and abolish nuclear weapons. We’ve signed countless petitions, lobbied MPs and held countless demonstrations - to no avail. We even held a singing demonstration in the Westminster Central Lobby when Theresa May said she would push the button and kill a hundred thousand people and parliament approved Trident replacement. By chaining ourselves to the railings we are sending a strong message: Our having nuclear weapons keeps the world in chains. It’s time to break the nuclear chain and free the world from the threat of a nuclear war.' 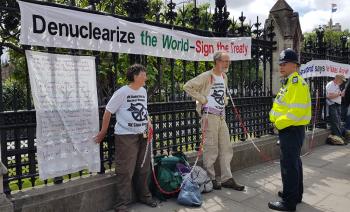 Jane Tallents and Brian Larkin of Trident Ploughshares, chained to the fence around parliament

Angie Zelter from Knighton in Wales said: 'Since the end of the Cold War the world has largely forgotten about nuclear weapons. But an exchange of just one hundred of the thousands of nuclear weapons deployed around the world right now would cause a nuclear famine and the deaths of two billion people. The situation is urgent. As long as the UK and other countries continue to rely on nuclear weapons to project power countries like North Korea will want to have them too, increasing the risk that someday they will be used again. Instead of working towards nuclear disarmament as they promised the UK and other nuclear weapons states are building a new generation of nuclear weapons and putting us all at risk of nuclear war. Tensions between the West and Russia or in the Middle East could lead to conflict. Let’s choose real security. Sign the Ban Treaty.'