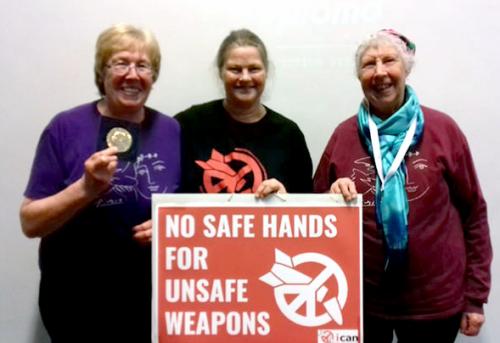 Paula Shaw, Dr Rebecca Johnson and Sheila Triggs (left-right) at a WILPF UK training day on the Treaty on the Prohibition of Nuclear Weapons in London, 7 April 2018.

At a London training day, women prepare themselves to lobby for nuclear disarmament.

'We need to recognise that we can change the debate in this country and this treaty gives us the means to do so' said Rebecca Johnson on 7 April, at a WILPF UK training day on realising the UN Treaty on the Prohibition of Nuclear Weapons (TPNW). Dr Johnson is a member of the British branch of the Women's International League for Peace and Freedom (WILPF UK) and founding co-chair of the International Campaign for the Abolition of Nuclear Weapons (ICAN).

WILPF UK had invited members and non-members to an interactive training day on lobbying for the TPNW in the UK. The purpose of the day was to provide an opportunity to develop negotiation and lobbying skills. Participants received background information about the treaty and the UK context, as well as practical advice on campaigning. We were fortunate to have speakers who had been present in New York during the final negotiations leading up to the UN adoption of the treaty. Janet Fenton (of WILPF UK and Scottish CND) gave an account of the successful WILPF campaigning efforts in New York.

Taniel Yusef (WILPF UK) highlighted the core humanitarian values and aims of the treaty, followed by Dr Rebecca Johnson who provided insight into key issues in the UK context. 'This is a real treaty in the real world. When the UN bans something, it stays banned', she reminded us as an encouragement to use the very existence of the treaty as an argument in meetings with MPs.

Dr Johnson and Janet Fenton gave useful examples of issues to bring up, including strategies for effective responses. In a practical role-play session, participants were invited to try their arguments on each other. They were divided into groups to simulate situations in which two or three, a good number according to Dr Johnson, campaigners meet with a key MP with a stated or assumed interest in women’s rights and humanitarian issues.

Similar training days will be organised by local WILPF branches. TPNW will be the theme of the WILPF UK annual autumn seminar. For more information, please contact WILPF UK or your local branch.

Paula Shaw, Dr Rebecca Johnson and Sheila Triggs (left-right) at a WILPF UK training day on the Treaty on the Prohibition of Nuclear Weapons in London, 7 April 2018.

Anna Rääs is a volunteer with WILPF UK.