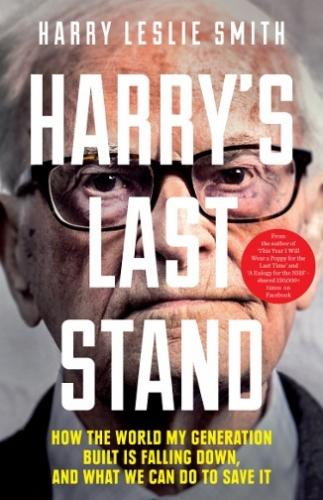 Obituary of a great voice.

There are a lot of things I could say about Harry Leslie Smith. He was a husband, a father, and the son of a coal miner. He was a writer, activist, and defender of the working classes. He was a vocal campaigner for the rights of refugees. He was a survivor of poverty, of the Great Depression and of the Second World War. He was a link to our history; a voice from the past bringing us a warning of where the future could go if we fail to act. After striving tirelessly to make the world a better place, he passed away from pneumonia, with his son John at his side, at 3.39am this morning (Ontario time).

Harry's life is a story of love, of loss, of poverty and of triumph. His books, Harry's Last Stand, and Don't Let My Past Be Your Future are powerful reminders of what life was like for the working classes and indigent poor of Britain before the creation of the NHS and the welfare state. I won't try to tell Harry's story – he does it powerfully enough himself – but I will tell you that his early story is a sad one, one none of us would wish to see repeated. The death of his sister Marion from spinal tuberculosis affected Harry deeply, especially as his parents could not afford the treatment to even keep her comfortable. She died in a workhouse infirmary, like thousands of other desperate people. The was no funeral, no headstone – as Harry said; 'My family, like the rest of our community, was just too poor to afford the accoutrements of mourning.' Marion's sad and needless death must be remembered by us all; our overloaded and underfunded NHS is being allowed to disintegrate, our welfare state continues to be dismantled, and avoidable deaths like Marion's are once again becoming a feature of the lives of Britain's poor.

When it comes to Harry, it is his life that we should remember. His story is ultimately one of triumph against the odds of his beginnings, in part due to the social changes that took place in Britain after the Second World War. He was able to live a happy life, settled with his wife Friede and their three sons. It was after Friede died in 1999, and their middle son Peter in 2009, that Harry turned to writing. He wrote his memoirs, and the social history of his time and his class. Harry said himself that – 'I am not a historian. At 91, I am history, and I fear its repetition.' He told his story, and it was a powerful one, inspiring thousands of readers, admirers and Twitter followers.

It seems to me that Harry's greatest passion in public life was defending our NHS. This is no surprise to anyone who's familiar with Harry's work. He told Marion's story, and wondered what would have happened to her if she had been afforded the same medical care that was available to wealthy victims of TB. In a 2014 article for the Guardian, he remembered how he felt the first time he used the National Health Service, in 1948;

'As I convalesced, I was gobsmacked at the great consequences of free health care and the potential it offered to improve our society. It was a transformational shift in how we as a country viewed our fellow citizens. The creation of the NHS made us understand that we were in truth our brother's keeper, and that taxation benefits everyone through maintaining not just our roads and sewers but the health of our children, workers and elderly.'

As he saw creeping privatisation (even of cancer services) proposals by UKIP that Accident and Emergency patients should be able to pay to jump the queue, and the decimation of our health and social care system, Harry spoke up. He wrote, he debated, he spoke, he yelled – 'keep your mitts off my NHS!'

When Harry fell ill last week, Twitter kept vigil, with his son providing updates on Harry's condition. I have never before seen anything like the outpouring of love, hope and solidarity for Harry during his last days with us. People like Owen Jones, Jeremy Corbyn and Mia Farrow tweeted messages of support; if only love and best wishes could heal us physically. Within 5 hours of his son John announcing his passing, there were thirteen thousand messages of sympathy, support and solidarity in reply. For the second time in a week, #IStandWithHarry is trending on Twitter.

John Smith has vowed to continue his father's work. So, I hope, will thousands of others.

Rest in peace, Harry, the world is a little darker without you.

Rebecca Elson-Watkins is a reporter with Peace News. Harry Leslie Smith's books are available from all good bookshops.