From the Ground Down

Countries in the Global South have been forced into the large-scale extraction of natural resources (coal, oil, minerals, land) in order to export raw materials. It is corporations based in Europe and North America who generally profit. This 'extractivism' is happening even in Bolivia, where the government once presented itself as the protector of Mother Earth. 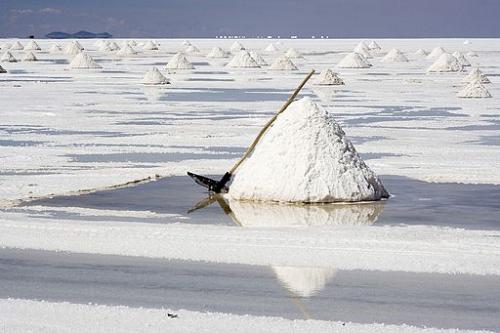 At this time of year I am always in Cochabamba, in the middle of Bolivia, in the heart of South America. The first book anyone wanting to understand the structural dynamics of this region's history reads is Eduardo Galeano's Open Veins of Latin America, charting the colonial plunder of the continent's natural resources, from timber to rubber to tin to fossil fuels, and of course in the process always exploiting to death the indigenous peoples of the region, forced to labour in these industries. The veins to which Galeano referred are more open than ever (and not only in Latin America of course). Extractivism - the large-scale extraction of natural resources, including hydrocarbons, minerals and land base for crops, in order to sell raw materials on the global market - is the lifeblood of the modern global economy.

In the UK, we are getting a little better at understanding the need to have a closer relationship with where our food is coming from, for our health and that of the earth. But we, as part of the industrialised Global North, are a long way by this point in the 21st century from making the connections between what happens at the place where energy and mineral industries tear up the ground, and our experience of the material world around us.

As that experience grows ever more digitised, sleek and 'virtual', the more distant the grimy realities of that extractivism becomes. We celebrate the coming age of electric cars without stopping to reflect that each one requires vast amounts of raw materials for privileged individuals to enjoy their private use. Or that the rare earths their batteries contain have to come from somewhere, perhaps the unrivalled landscapes of Bolivia's Salar de Uyuni, the world’s largest salt flat, in southwest Bolivia - whose pristine beauty is threatened by the global thirst for lithium.

Extractivism is the toxic base ingredient of a recipe that has fed capitalist imperialism over centuries – a project for which inequality is a structural necessity, ecological destruction an inevitable consequence, and transnational profiteers the leading agents.

At this moment in time the Latin American continent is rife with conflicts between local communities trying to protect their territories, environments and livelihoods from extractivism. As well as metals to feed modern manufacturing the treasures sought include oil and natural gas (increasingly via fracking), coal, rivers on which to build massive hydropower projects, and vast tracts of deforested land for crops like genetically-engineered soya to feed beef cattle for the international market.

Countries like Colombia and Brazil top global lists for dangers faced by those standing up for their right to determine if and how their natural resources will be used. Those doing so are increasingly criminalised. The murder of Berta Cáceres in Honduras last year brought a new global spotlight onto these issues, and in particular onto how these struggles implicate women.

Assigned gender roles around how the tasks and responsibilties for maintaining families and communities are distributed mean that women bear the brunt of the broader destruction which these industries wreak. Since women are responsible for ensuring the provision of water to their families, for example, when mining activity exhausts and pollutes local water sources it is women who experience that first and foremost. It is also well-documented that rape and sex trafficking, and other forms of violence against women, rise where mining is present.

More often than not it is multinationals registered in Europe and North America who profit from extractive projects, exploiting the vulnerability (and often weak regulatory authorities) of economies that still rise and fall with the global commodities markets.

Here in Bolivia it was precisely a rejection of this kind of neo-colonial natural resource expoitation that led to Evo Morales getting elected as president in 2005. The policy direction of the administration since then shows how difficult it is to get out of the extractivist 'trap'. To keep its electoral promises and deliver new schools, roads and clinics in South America's poorest country the quickest and easiest route has been to exploit mineral wealth (still often in partnership with foreign companies and, increasingly, the Chinese).

Right now dozens of hydropower projects are being planned in order to export electricity to neighbouring countries and add to government coffers. Bolivia's 'neoextractivism' has so far been a politically successful formula, but comes at a high cost to communities on the frontline and beyond. A recent severe drought has been exacerbated by thirsty mining activity. A government that once sought to make itself synonymous with protecting Mother Earth has in the end, in the name of national development, trodden a similar path to the Spanish conquistadores and the 'Washington Consensus' economic policies imposed by the World Bank and International Monetary Fund in the 1980s and 1990s. The inherent contradictions are becoming more apparent – and controversial. On 6 February, there was meant to have been a con

ference in La Paz to discuss the impact of new oil projects on indigenous communities who live in the Bolivian Amazon, who have decided to remain uncontacted. The event was disrupted and forced to shut down by supporters of MAS, the governing political party - an action that has been denounced by human rights groups here in Bolivia.

Large-scale extractivism to feed the fantasy of never-ending 'growth' via pathological consumerism is the underlying factor for all of this. While those who lose out in this situation risk their lives or blame each other, the CEOs and shareholders of the extractive industries are grinning all the way to the tax haven.

Mads Ryle is based between Brighton and Bolivia and is active on environmental and migration issues. She wants to work with others on confronting corporate power. madsryle AT gmail.com