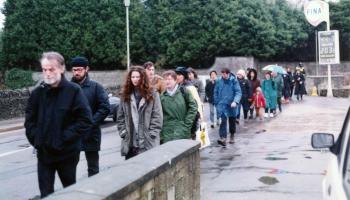 Coles was publicly exposed as a police infiltrator on 12 May, after investigation by the Undercover Research Group. On the same day, details emerged of an abusive sexual relationship that Coles had had with a 19-year-old animal rights activist, 'Jessica', in 1992, while he was undercover. Coles concealed his age (he was 32, but pretended to be 24) and the fact that he was married, as well as his role as an undercover police officer. As a result of these revelations, Coles was forced to resign as deputy police and crime commissioner for Cambridgeshire on 15 May. 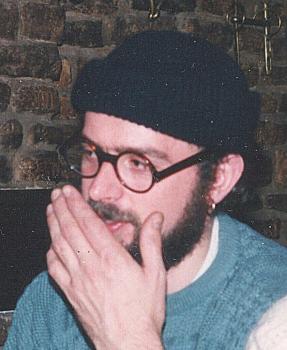 Jessica told Police Spies Out Of Lives: 'This has been one of the most stressful times I have ever known: my life as I knew it was a lie. One of the people that I trusted most never existed.  I can’t look back at those times in the same way now. I can’t trust my judgement, because I got things so wrong. I am now beginning to look at people I know differently. I can’t even feel that I’m being paranoid, because it’s justified.'

It's clear from the work of the Undercover Research Group that Coles focused his attention on the animal rights movement over the years 1991-1995.

What is only being revealed today is that, early in his tour of duty if not at the very beginning of his work, 'Andy Davey' infiltrated the peace movement.

These photographs document the participation of 'Andy Davey' also known as 'Andy Van' or 'Andy the Van' in an anti-war protest on 16 March 1991 at the US air force base at Fairford, Gloucestershire. The protest was organised by a nonviolent direct action group called 'Gulf War Resisters' - it changed its name a week after the demo to ARROW ('Active Resistance to the Roots Of War').

The photographs show Coles attaching peace symbols to the fence at the US air force base at Fairford (below left - he is on the far right), marching back into Fairford (top - second from left), and sitting inside a pub in Fairford (above right). 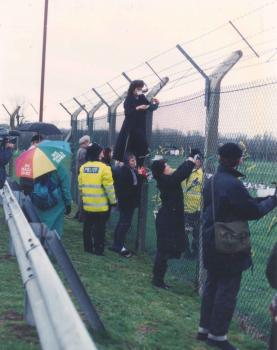 Coles attended a number of ARROW meetings during 1991, including one in May 1991 when two ARROW members, Chris Cole and Milan Rai, had a book launch for the transcripts of their recent police interviews, after being arrested inside USAF Fairford.

Coles' infiltration of ARROW fits in with his and his handlers' interest in direct action - he went on to infiltrate animal rights direct action groups between 1991 and 1995.

According to the ARROW address list for November 1991, 'Andy Davey' was then 'living' at 70 Montpelier Road, London SE15. He had a pager rather than a phone.

The Undercover Research Group's full profile of 'Andy Davey', including photographs, can be found here.