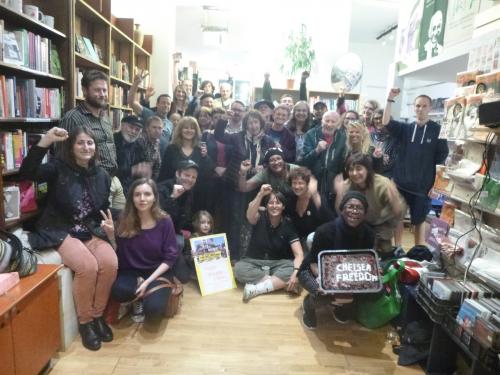 Chelsea Manning is a whistleblower who was working for the US military as a data analyst during the US-led coalition war in Afghanistan. She was sentences to serving 35 years in military prison for leaking classified US government documents to the Wikileaks website, and revealing to the public that the US army, the CIA and Iraqi and Afghan forces committed human rights violations. The crimes she exposed have never been investigated.

In one of his final acts before leaving office, US President Barack Obama commuted Chelsea Manning's sentence; the 29-year-old transgender US Army private, born Bradley Manning, was freed on the morning of 17th May 2017, instead of her scheduled 2045 release.

Ben Griffen spoke from Veterans for Peace UK and showed a short extract of the Collateral Murder footage as a reminder of the shocking war crimes, and the everyday acts of atrocity, sanctioned by warfare, that Chelsea's actions revealed when she became a whistleblower.

Other speakers, including Kirsten Bayes (@KirstenBayes) and Mika Minio-Paluello (@mikaminio) spoke of the inspiration she provides for anti-war and transgender activists and those speaking out for what is right.

A statement from Chelsea Manning just before her release shows how courageous she is.

“For the first time, I can see a future for myself as Chelsea.I can imagine surviving and living as the person who I am and can finally be in the outside world. Freedom used to be something that I dreamed of but never allowed myself to fully imagine. Now, freedom is something that I will again experience with friends and loved ones after nearly seven years of bars and cement, of periods of solitary confinement, and of my health care and autonomy restricted, including through routinely forced haircuts. I am forever grateful to the people who kept me alive, President Obama, my legal team and countless supporters.

“I watched the world change from inside prison walls and through the letters that I have received from veterans, trans young people, parents, politicians and artists.My spirits were lifted in dark times, reading of their support, sharing in their triumphs, and helping them through challenges of their own. I hope to take the lessons that I have learned, the love that I have been given, and the hope that I have to work toward making life better for others.”