An interview with Daniele Santi – secretary general of the Buddhist peace group, Senzatomica.

Daniele Santi: Our aim is to raise public awareness about the threats of nuclear weapons and to empower each individual to speak out for a world free of nuclear weapons. In order to create an unstoppable force for peace, we launched a touring exhibition, believing that it is people’s right and duty to speak out. 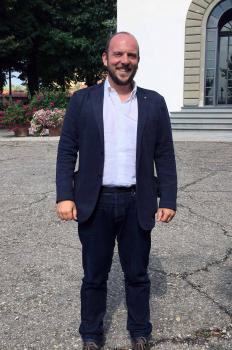 Since we started in 2011, hundreds of thousands of people have visited over 70 exhibitions organized in towns and cities across Italy. We have also organized concerts, TV shows, flash mobs and so on. We really want to achieve a process whereby people can act and show that such a far-reaching goal is not beyond the grasp of ordinary people. Men and women have stood up for peace, countless people have done so. There are equivalent movements such as ICAN, Pugwash conferences and many others. We want to show that each individual has the power to change the world, to transform our behaviour and to share our humanity at its deepest level. We believe that if we campaign against nuclear weapons, we are fighting the root of powerlessness.

PN: How did Senzatomica start?

DS: We read the 2009 proposal, 'Building Global Solidarity for Nuclear Weapons Abolition' by Japanese philosopher Daisaku Ikeda. It suggests five points for action. We felt we, as ordinary citizens, rather than politicians, could act on the fifth point which addresses empowerment. In order to empower people, we needed a shift of public opinion. In our Senzatomica campaign we reached out to up to a million people. Over 300,000 people have visited our exhibitions and 40,000 are signed up to our website.

We also decided we wanted to start a movement and to create a wave of transformation. We wanted to inform people and generate events, to put forward proposals and ideas. Our exhibition is multimedia: we show videos of survivors, as well as the effects of a nuclear explosion at a distance of 50 miles away. Ordinary sounds of children playing and traffic give way to the sound of a plane, the dropping of a bomb and then total silence and tremendous winds. We explain the difference between human security and weapons-based security. All visitors are shown around the exhibition by trained guides.

As Senzatomica campaign we want to encourage the Italian government to change its position. So many mayors have published statements in which say they want the government to push forward for a nuclear weapons convention. So we are involved with lobbying and civil diplomacy.

We can abolish nuclear weapons not by dismantling bombs but by transforming the human spirit, otherwise, as Norwegian peace studies professor, Johann Galtung, once told me, 'we will begin again with forks'. Aside from the exhibition, other associated organizations have put on conferences and film events. Like us, they see that, if you don’t actively fight against the evil that nuclear bombs represent, then you are in fact aiding and abetting that evil.

We have organized 70 exhibitions across Italy in the last few years. Each town in Italy organizes itself through a volunteer committee. Academics are also involved; whether lawyers, scientists, doctors or others and we have also created side events for the exhibition. We are invited to conferences and events, not as a religious organization but as campaigners for a nuclear-free world. The exhibition, although promoted and supported by the Buddhist NGO SGI-Italy, is totally self-sustainable.

PN: What about the impact on education?

DS: As Buddhists, we understand that we can change the future through education. Our main goal is to reach out to students. Our school contacts visit schools to promote this exhibition; and children have painted thousands of paintings. Even primary school age children, aged 10 or 11 can see the exhibition, and we have a special version without distressing images for children as young as eight years old. Teachers are involved in running workshops before and after the exhibition. Our main enemy is ignorance: how can we reach out to the next generations?

Our exhibition is not intended to scare people but we must address the dignity of life, the joy of living and look at how nuclear weapons threaten our future. Everything starts with friends, families and interconnectedness. Although originating with Buddhist concepts, we don’t talk in religious terms. We talk about humanism. Nuclear weapons threaten the whole human race. After we have abolished nuclear weapons, we will continue to work for peace; perhaps we will work for a world without arms. However, all the other campaigns that other organizations are working on could come to nothing if we do not abolish nuclear weapons. It may seem arrogant to say that, but if one understands the true nature of nuclear weapons, then most people would agree with this statement.

PN: How important are the hibakusha (survivors of Hiroshima) experiences in your exhibition?

DS: We won’t be able to take 100,000 school children to Hiroshima – the most meaningful thing that they can do however, is listen to the experiences of the hibakusha. Through establishing this human-to-human empathy and connection with the people who went through this terrible experience, they can say to themselves, 'I don't want this to happen anymore'. One hibakusha who spoke to us during an exhibition in Italy in 2011 was Shigeru Nonoyama from Hiroshima. He had never spoken about his experience, even to his children or grandchildren. He even started to cry when he gave this experience. He was already 80 years old. 'I wanted to protect my children from what I had seen.' Later his experience was published in a book in Japan.

PN: What are you going to do next?

DS: We have seven more exhibitions opening before the end of the year. We want to put on a compact version so as to be able to reach smaller towns and villages so that everyone in Italy can see this exhibition.