It’s about time the British had an identity crisis

In the wake of the June referendum result, newspapers of right and left are reporting that Britain has an identity crisis. As the demographic breakdowns of who voted what show, we are deeply divided in our attitudes, by class, by region, by nation, by colour, and by age. While it's possible that some of these differences can be explained by people's varying assessments of the pros and cons of alternative constitutional frameworks, it's likely that in large part, the result sheds light on some divergent conceptions of national identity in Britain, which in turn can tell us something about the shifts in attitude that will be necessary for a more peaceful world.

Perhaps it shouldn't be surprising that our identity is in flux. In the sociologist Benedict Anderson's phrase, the nation is an 'imagined community', a social construct, an invention. The very notion of Britain is contested: especially from the perspective of many in the Celtic nations for whom the term can obscure the differing national identities of the UK.

Yet at the same time, the desire for 'Britain to regain control of its borders' was the prime motivation of a third of Leave voters across the UK. Clearly there is something going on here. Even if nationhood doesn't objectively exist, as an idea it so powerful that it influences not only our every move, but who can move where. Still more seriously it affects our government's ideas of who it is and isn't OK to kill.

Culture is complex, embodying in EB Tylor's phrase 'knowledge, belief, art, morals, law, custom and any other capabilities and habits acquired by man as a member of society'. Just as it provides the toolkit with which we interpret the world, it also dictates the boundaries to our rationality.

National identity, at least in the case of nations with states, can mean something more: a way of delineating who counts as 'us' and who counts as 'them', sanctioning violently different treatment for each. It was the boundaries to Britishness – based on skin colour or birthplace – that enabled national elites to persuade ordinary people to play a part in an empire that once stretched over a third of the world, and recruit people to fight in the wars that accompanied and preceded it.

Those boundaries were compounded by the peacetime growth of immigration restrictions, which began with the 1905 Aliens Act – in that case an attempt to keep out persecuted Jews. The result wasn't only metal fences but mental fences, as prejudice was codified into law, extended to restrict other groups over the century since. Those psychological dividing lines of otherness are still with us.

From our government's decisions to keep extending the war in the Middle East to racists attacking darker skinned people in the streets of Britain, the borders of the mind inherited from our forebears have proven violently pervasive. Perhaps it is revealed at their most extreme in our elected politicians' recent decision (by a factor of four-to-one) to maintain the theoretical capacity to kill millions of people with nuclear weapons – but only if, of course, those people are from another country. In such a context, surely it's about time for a rethink.

Fortunately that isn't the whole story. There is a whole array of influences shaping the outlooks of people in Britain, hinted at in the result of the EU vote. Whilst it's true that national culture is transmitted by institutions over the generations, governing elites aren't the only forces at play. From the perspective of a younger person, I think five factors in particular are already in the process of reshaping my generation's identity, to the extent that a different version of nationhood could yet be waiting in the wings.

The first is the existence of the internet, which has made it as easy to contact someone on the other side of the world as in the next room, changing the conception of distance. If – as Benedict Anderson argued – the idea of the nation was moulded by people reading the same newspapers, the 'digital native's' sense of the boundaries of community is in the process of being fundamentally reshaped by social media.

Second, is the cumulative cultural impact of the anti-discrimination campaigns of the past century, from the working-class led battle of Cable Street, through the Rock Against Racism concerts of the 1970s, to the Kick Racism out of Football campaign which began in 1993. As a result, certain 'othering' words for ethnic minorities that might once have been commonplace had, by the 2000s, become – for the most part – culturally unacceptable. For those of us who have lived in multi-cultural areas, the idea of the boundaries of community being based on birthplace or skin-tone makes no sense, having experienced instead the things that we have in common.

The third, linked to the second, is premier league football. As David Beckham wrote recently for the Standard, when Manchester United won the Premier League, FA Cup and UEFA cup in 1999, it was with a team of players from all over the world. It's possible that that experience stayed with us, so that when people for whom football has always been international finally reached the world of work, part of the idea of 'fair play' was to find it perfectly obvious that the person best suited for a job deserves it, regardless of their country of birth. Why on earth should it be otherwise? 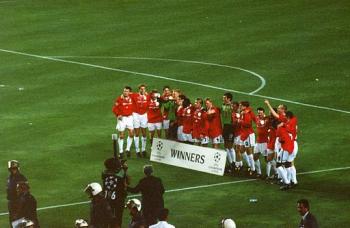 Contrasting conceptions of where the edges of our imagined community lie even come in to approaches to the environment. Awareness about global climate change broke in to public consciousness in 1988, and mine was the first generation to learn about the greenhouse effect in school science lessons. Even while government in Westminster continues to make the deadly unconscious mental calculation that says that typhoons in the global south are a fair price to pay for the continued over-use of fossil fuels here at home, for many younger people it is just logical that if the greatest threat our planet faces is transnational, then people should come together across borders to find solutions.

The fifth factor, of course is (perhaps I should now say was?) the European Union. For many of my generation the EU was most obviously introduced to us through the opportunity of visa-free school exchange visits with people from countries with whom who our grandparents' generations were at war. We made friendships, sometimes even relationships. But it wasn't accessible to everyone.

The only emergent European-British identity was bound up with economics, in particular the only slightly ameliorated form international capitalism which the EU was founded to promote and perpetuate. Accordingly it was generally those people from the professional classes with the ability to afford and enjoy the benefits of the European Union who felt that identity most intently. But they were the minority.

Mine is also the post-1979 'Jilted Generation' that – despite the modest market regulations provided by the EU – has only ever known increasingly neo-liberal public policy leading to growing inequality. In practice that meant that there was a growing divide between those who could and couldn't afford to travel, beginning with those school exchanges. For people of any age for whom life was getting worse, the sense of scarcity as the choice and quality of jobs declined, was too easily blamed on anyone in Britain who was born abroad, encouraged by those newspapers and political parties for whom that has always been their agenda.

But this isn't universal. In Scotland for example the project of building broadly inclusive and redistributive political and cultural institutions has resulted in a broadly inclusive and redistributive identity resulting in pro-peace and pro-immigration politics. Both Scotland and Welsh-speaking Wales voted overwhelming to stay in the EU. Their MPs also voted overwhelmingly to reject the replacement of the Trident nuclear weapons programme.

Here there are at least three lessons for progressives. Firstly, that identity needn't be exclusivist, nor based on colour or legal documentation. Secondly, that the institutions we build – and the values they transmit – matter. And, thirdly, that if we care about building peace then tackling both racism and inequality has to be part of the struggle.

Take back control of the borders in our minds

I don't write this essay to say that the Scottish and Welsh have all the answers, or that my generation has miraculously managed to decolonise our collective mind-set by going to football games. I write this to make the case that identity is socially constructed and therefore the decline into a spiral of xenophobia and war is avoidable. We can each do something about it, which begins with listening, to why people might have one view or another. Building relationships and trust with people of any walk of life can be a step to taking action together, for example to welcome refugees or stop deportations. And it's through action we can create the stories and institutions that begin to recreate our collective sense of self.

When we do these things they make a tangible difference to people's lives. But we also contribute to something even bigger. Every time we put universal values in to action, we liberate a space in our nation's bounded rationality. When we look through it, we can glimpse what a more peaceful version of community could be like.

Tim Gee is an author and environmental campaigner.