Sometimes something like a public therapy session, a feminist performance about the female body that got stronger and more daring as it went on 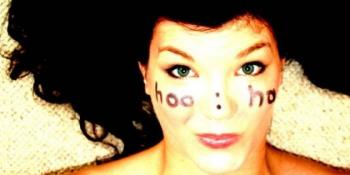 hoo:ha bills itself as 'comic performance art that cleverly pits funniness against sexiness in a knock-down, drag-out fight for control of the female body'. It was definitely funny, and it was often funny about sexiness, but there wasn't much of a battle between funniness and sexiness, and if control of the female body was explored, that was never explicit beyond the promotional material.

In terms of the cleverness of the show, some of the jokes definitely were clever; my personal favourite was the sung monologue between the show's lead, Hannah Balou, and her glove puppet, conveying the message that 'nobody wins in a feminist fist fight'. However, a lot of the show's laughs hinged on a child's definition of clever: the ability to shock.

I certainly was shocked to see a dog eat Hannah's mother's ashes, for example (it would take a lot of explaining to account for how the show ended up going there). I was also shocked, and amused, the first time Hannah got naked, but it would have been a lot cleverer had there actually been a reason for the costume change which provided the conceit for the nudity.

Gleefully and gratuitously extracting gasps and incredulous giggles from the audience seemed to be the show's raison d'etre, however. I, and I think most of the rest of the audience, found this perfectly enjoyable, but my sister, for example, found it rather uncomfortable, as it did at times feel like a public therapy session for someone with a pathological need for attention (which is probably not the kind of problem which would be best treated with a public therapy session).

The show got stronger and more daring throughout, and the penultimate 'bit', unlike the rest of the show, actually gave me some feminist food for thought.

This involved a twerking sequence set to an upbeat cover version of Nirvana's Rape Me, which Hannah performed in a crop top and pair of hot-pants bearing the slogan 'feminist' across the back. She prefaced the bit with reference to the two-year-old controversy about Miley Cyrus appropriating African American culture with her twerking, and a joke about how she, Hannah (a white woman) had been 'slaving away' to highlight her own white privilege with reference to what she was about to do (which was, of course, exactly the same as what Miley did/does, albeit much better).

I like to think that the whole thing was a send up of my pet feminist peeve, which is when someone does something that is blatantly not very feminist at all, but proclaims that choosing to doing so as a feminist (although not usually with the word feminist actually slapped across them) somehow makes it feminist after all.

Equally, however, it might just have been a white woman knowingly doing something many black feminists have taken issue with, while making light of rape, and having kicked the whole thing off with a joke about slavery. Usually I would argue that if the audience doesn't know whether the performer knows how much of a dick they're being, then even if the performer does know, they haven't successfully conveyed their concept.

However, Hannah promised us 'feminist ambiguity' at the very start, aptly illustrated by her one shaved and one unshaved armpit, so I don't feel I have a right to complain.

Also, the show offers consolation prizes for anyone disappointed with this kind of feminism as a great opportunity to learn how good you are at distinguishing a woman's real orgasm face from her fake orgasm face, and how well you're able to recognise an early months pregnancy.