A Girl and a Gun - a review

A disturbing play about guns, male violence against women and sex 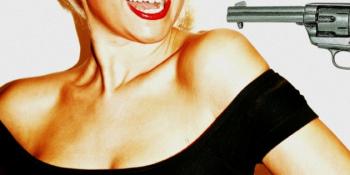 This was one of the most powerful pieces of theatre I've seen in a long time. The audience was promised gun-twirlin', play-actin', and Nancy-Sinatra-dancin'. We got all those things, and we didn't get any strong swear words, explicit sexual references, nudity, or actual bloodshed. Technically, it was a show you could have taken your children to, but it was also much more sexual, and certainly more violent and disturbing, than the show I went on to watch later that evening, which actually featured two naked women, some whipped cream, and a dog.

A Girl and a Gun is a dark and deeply uncomfortable exploration of the continuum between what's sexy and what's violent, more specifically the continuum between male violence against women and what's considered inherently sexual. You don't need to read between the lines to know that a woman on her knees with a man holding a gun in her mouth is 'a scene of a sexual nature', but that particular scene is just spelling out what's been happening throughout the show.

For example, there is a 'shooting lesson' sequence, which somehow manages to be a more sexually voyeuristic experience than I imagine actually watching a live sex show would be. It also becomes more and more sexual the more aggressive (or 'excited') the man giving the lesson becomes. Of course, using guns as a motif to make this point (that there's something sexy about violence and violent about a lot of what's considered sexy) might seem like cheating, as there would probably still be something phallic about guns, with or without their violent association.

But plenty of things manage to be phallic without being sexual (often they're just funny) and the phallic shape of the gun only comes into the violently sexual or sexually violent equation towards the very end (when it's in a woman's mouth).

What's really sexual about guns is their violent association and what's really disturbing about the show is the way it forces the audience to confront the familiarity with which we understand and enjoy that violence as sexual when its directed at a woman. So at one point, Louise Orwin, the show's creator and female performer (playing 'Her') acts out being killed in the variety of ways Hollywood has made popular, including but importantly not limited to the variety of ways in which a woman might get shot for an audience's viewing pleasure.

One of the many strokes of Orwin's genius in the play, however, is to simultaneously make it an unapologetic exploration of this theme, foregrounding itself as an intellectual exercise of the kind by making the audience read the actors' extremely leading stage directions, for example, and at the same time weaving the many illustrative examples of the male-violence-against-women-as-sexy trope into the poignant story of a woman falling in love, establishing a relationship, and the relationship becoming abusive.

This story is of course all too unremarkable in the 'real world', and contextualising it within the cultural production of such abuse as part of what's sexy is politically on point and much to be welcomed (in my feminist opinion anyway).

I could enthuse at much greater length about the subtleties and general quality of the play, but I will only note that Orwin and her male opposite number, Mark Stevenson, acting 'Him', both gave genuinely impressive performances (particularly if Stevenson really was, as asserted, seeing his lines for the first time on the autocue that night) and that theatre is rarely this postmodern without being pretentious. Nor do many plays manage to say something politically useful and still be this engaging. This one does manage it, however, and anyone who has the chance to see it probably should (but don't actually take your children).

A Girl and a Gun is part of Calm Down, Dear: A Festival of Feminism, at Camden People's Theatre.