‘RAF’ Croughton – Secretive, unaccountable & out of control of the UK government

Ahead of the national demo there on 4 October, Lindis Percy and Chris Cole take a look at RAF Croughton & its role in the US drone wars. 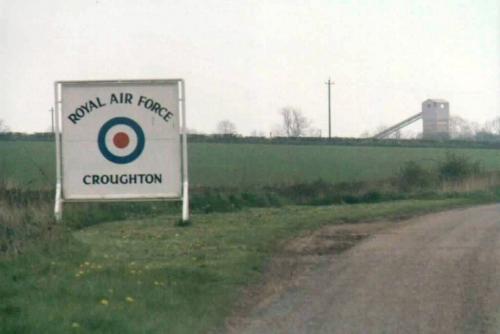 Seemingly not many people know about ‘RAF’ Croughton near Brackley and bordering Northamptonshire and Oxfordshire. Misleadingly referred to as RAF, this important US base is occupied and controlled by the US and their agencies under the umbrella of the United States Air Force. It supports Presidential, NATO, US European Command, US Central Command, Air Force Special Operations Command, US Department of State operations. The NSA, CIA and a contingent of GCHQ personnel are also present. It operates one of Europe's largest military switchboards; processing approximately a third of all U.S. military communications between the USA and Europe and supports over twenty different communication and defence systems. The base is involved in intelligence-led warfare (Drones) and illegal surveillance and intelligence gathering on all citizens.

Just up the road is USAF Barford St John and a satellite base to Croughton. Earlier this year CAAB learnt that Military Land byelaws (now law) were proposed at Croughton and Barford St John; indicating that something significant was being planned.

Information from Washington was stumbled on by CAAB (with additional information given to CAAB by Cahal Milmo of the Independent) which said that the base was to become the largest intelligence hub outside the US. $317m is to be spent for an ultra-secure intelligence centre staffed by up to 1,250 personnel and covering operations in Africa (AFRICOM). The upgrade will make it as big and as important as NSA/NRO Menwith Hill in North Yorkshire. There has been no debate in Parliament.

Human rights group, Reprieve has uncovered that BT installed a high speed fibre-optic data cable directly between US drone base Camp Lemonnier in Djibouti and ‘RAF’ Croughton. The 2012 contract shows that the US Defense Information Systems Agency paid BT £13 million for the cable which can carry live video images, transporting digital information at the rate of 2.5 gigabits per second, about 30 times faster than BT's superfast home broadband.

Camp Lemonnier is the main centre for US drone operations outside Afghanistan. It sends Predator and Reaper unmanned aerial vehicles armed with Hellfire missiles on "targeted killing" missions against suspected terrorist cells in Yemen and Somalia. The live video feed from the drones will be seen by the drone pilots, but also by intelligence analysts - nicknamed ‘screeners’ - who are directly in touch with the drone operators, through voice and data links, analysing the video from the drone.

The existence of a secure military communications link between Camp and Croughton means that US personnel at Croughton are no doubt involved in analyzing information and video from US drone flights in that area. It is certainly possible that information obtained through the cable in this way and analyzed by US personnel in the UK is being used to direct further US drone strikes.

RAF Marham near Kings Lynn is home to Project Crossbow, a joint UK-US intelligence analysis project. Operated by the RAF’s Tactical Imagery Intelligence Wing (TIW) but “under the tactical control” of a USAF Squadron, Crossbow receives and feeds information into the US Distributed Common Ground System (DCGS), the US military’s key tool for collecting, analysing and distributing information and intelligence collected from U-2, Global Hawk, Predator, Reaper, MC-12 and what the USAF discreetly calls “other ISR platforms.“

GCHQ also supplies intelligence to the US that may have been used in targeted drone strikes in Pakistan. Noor Khan, whose father was killed in a drone strike in 2011, sued the then the Foreign Secretary, William Hague, in attempt to examine whether UK officials at GCHQ share information about targets in Pakistan with the CIA, and whether this could therefore make British spies complicit in murder or war crimes. The case was thrown out by the courts however, as it could ‘imperil relations’ between the US and UK.

There is a chance to come to USAF Croughton on Saturday 4 October to learn more about the base and their activities, how they operate and the laws surrounding the base.

As part of the international week of protest called for by the Global Network Against Weapons and Nuclear Power in Space - Keep Space for Peace Week and the Global Day of Action on Drones campaigners will walk to the main gate at Croughton for a national demonstration at the base. The event, organised by Oxfordshire Peace Campaign and Oxford CND includes speakers, music and stalls.

The main gate at Croughton is on the B4031, off the A43, 2 miles North of M40 junction 10, just South of Brackley, Northamptonshire. Travel west on the B4031, past the main gate, turn left at mini-roundabout on eastern edge of Croughton village, and park at signed site, not at main gate.